One early morning 34 years ago, in the twilight days of January, the hurly-burly of life at St Mary’s College Kisubi, one of Uganda’s premier secondary schools was thrown out of gear when a group of haggard-looking government soldiers, fleeing from disheveled but heavily armed National Resistance Army [NRA] rebel soldiers scampered through the school compound.

Several volleys of automatic gunfire had earlier been heard, not far away from the school. None of the petrified students who were at the College that day had ever imagined that their school would become a flashpoint of conflict.

“It was the morning of either the 23rd or 24th of January-1986. The school had just re-opened after a holiday recess. I was in S3 then and we were in class when several rounds of automatic gunfire started going off. The firing went on for a while and then we saw government soldiers running through the compound-shedding their uniform as they fled towards the lakeside,” Andrew Magona, one of the old students, calls to mind.

“Shortly after, we saw young boys in rugs, barefoot and armed to the teeth, giving chase in what we later found was a surprise NRA attack to cut off Kampala from Entebbe.”

“That morning, I remember one of my roommates hastily waking me up. I was not accustomed to rising early. Because of fright, I did not even have breakfast. I remember joining other students as we figured ways of staying safe.”

Luckily for the students, the rebel soldiers were not the forbidding type.

“They were amiable and approachable. That gave us the confidence to accost them and have a chat. By the time, the rebels got back to the College, after pursuing government soldiers, some of our colleagues had picked up some discarded boots from fleeing government soldiers and had tried them on,” Magona recalls.

The rebels who by then had gotten the worst of some back and forth battles with government forces in a bid to capture Entebbe knew that their presence at the college raised the specter of a government reprisal attack and so they advised the students later on in the day to find their way to Kings College Buddo through Kawuku.

The rebels who were under the NRA's 5th battalion rationalized that Buddo would be a good sanctuary for the students since it was in an area that was under their control.

When the students led by Brother Peter Kazzekulya, who was the school’s headteacher reached Kawuku, they were advised to eschew using the main road.
They moved along a tiny checkered footpath that led them to villages such as Ssisa, Nakonge, Nsaggu, among others.

When the students with their headteacher got to Ssisa, which is about five kilometers from Kawuku, it was decided that they would camp for the night at St Peter’s Primary School.

“That night the Milky Way was resplendent with shining stars. Many of us just gazed and feasted our eyes on the starlit sky for most of the night. Very few people slept,” Nick Mujira, an old boy and now the proprietor of Inspection and Certification Company, Inspecta Africa Limited, recollects.

Earlier on as the sun hit its twilight that day, the students heard government helicopter gunships hovering through the skies.

“We had earlier been advised by the rebels to leave spaces between each other as we slept as a means of eschewing death in the event of a government helicopter attack,” Andrew Yawe, one of the old boys tells Masaabachronicle.

Rather ill-advisedly the next day, the students were given the cue to head back to the college. It was a false dawn. A few kilometers into their trek back, sounds of heavy gunfire rang out as government forces fired on fleeing rebels. The rebels met up with the students.

“The rebels were making a tactical withdrawal. There was pell-mell as we took to our heels. Everyone ran. That day was a far cry from the previous day when we calmly walked and reached the Primary school without much incident. In the process of fleeing however a stray bullet ripped through a shoe of one of our colleagues who has since passed on. The bullet grazed his ankle, causing even more panic,” Magona recalls.

On Saturday 7th March, about 55 of the College’s old boys, who lived through the chilling scare gathered to relieve the experience, principally reenacting the grueling 25km trek they made as they sought to reach Buddo in 1986.
It wasn’t just walking however for the students, most of whom were teenagers then. On occasion, they ran especially when they had gunshots.

At the crack of dawn, as glints of sunshine penetrated the school horizon, the nostalgic jaunty trekkers were flagged off from the College’s football pitch by Kazzekulya. 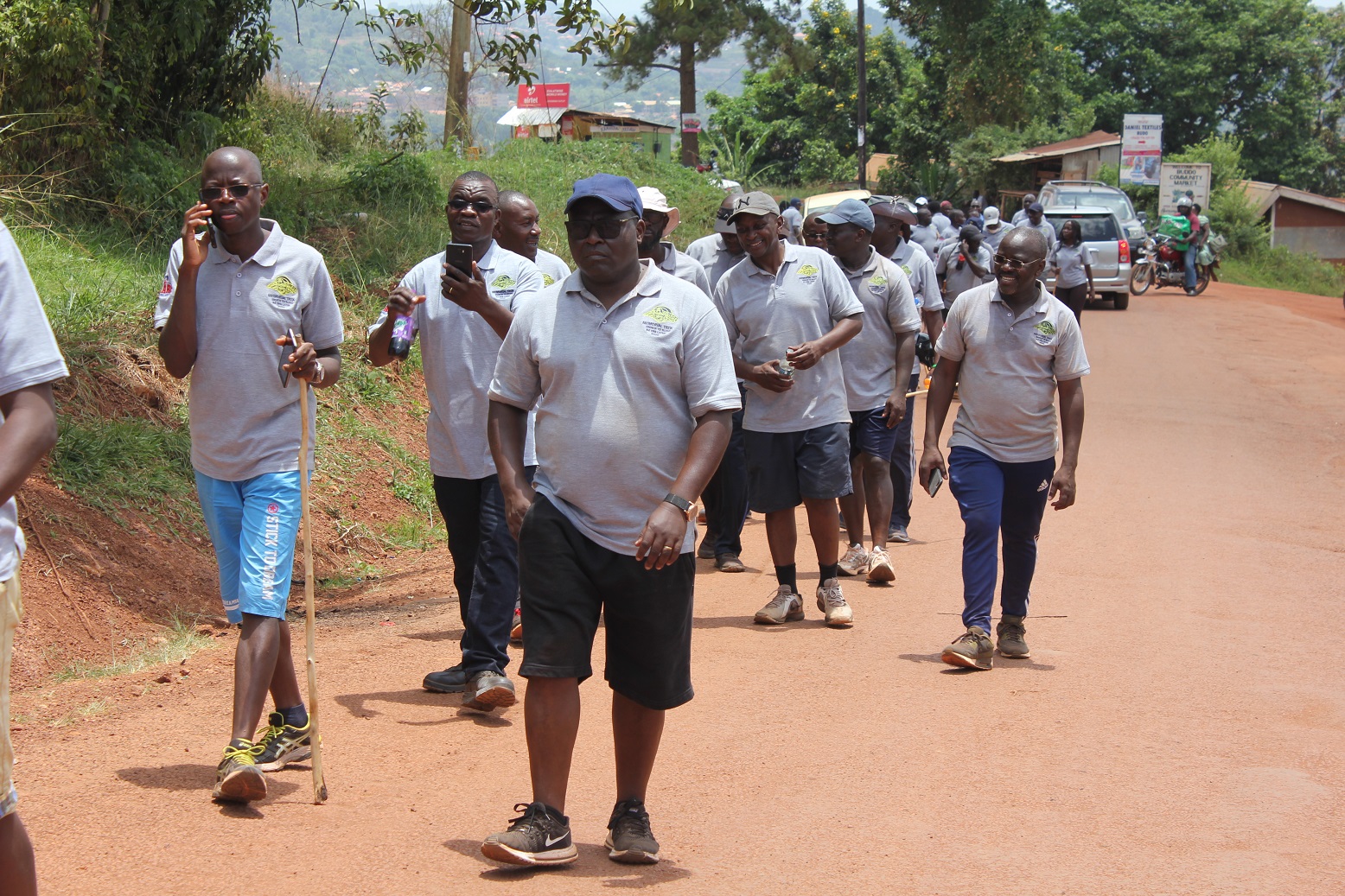 Rather, unfortunately, as the trekkers were getting into a comfortable stride on the preliminary dusty stretch of the Kawuku-Ssisa-Namugoga-Nsaggu road,  that the old boys trod on as they escaped; the sun-rays exacerbated to piping hot levels and dust storms caused by vehicles moving back and forth also got worse. 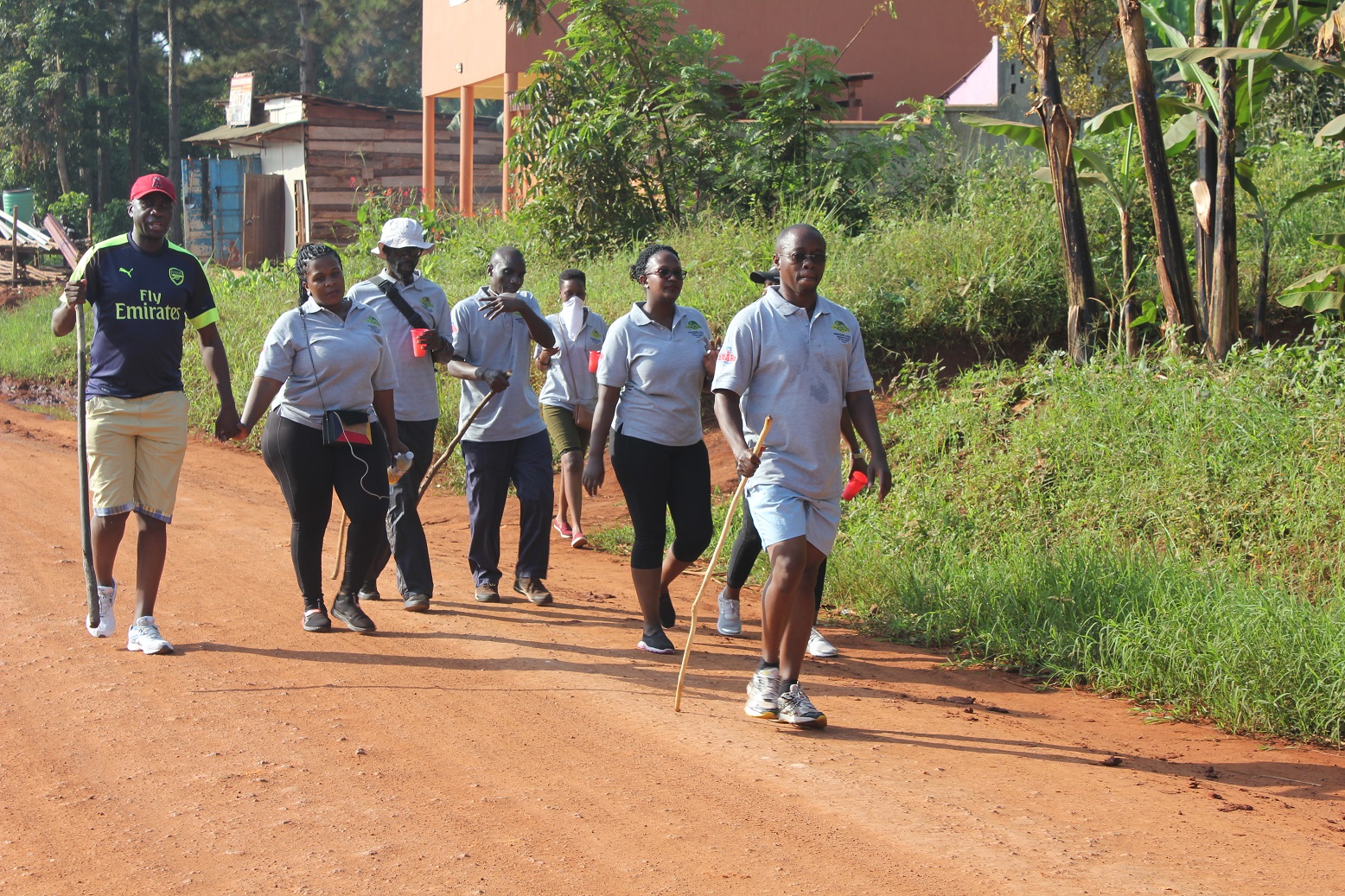 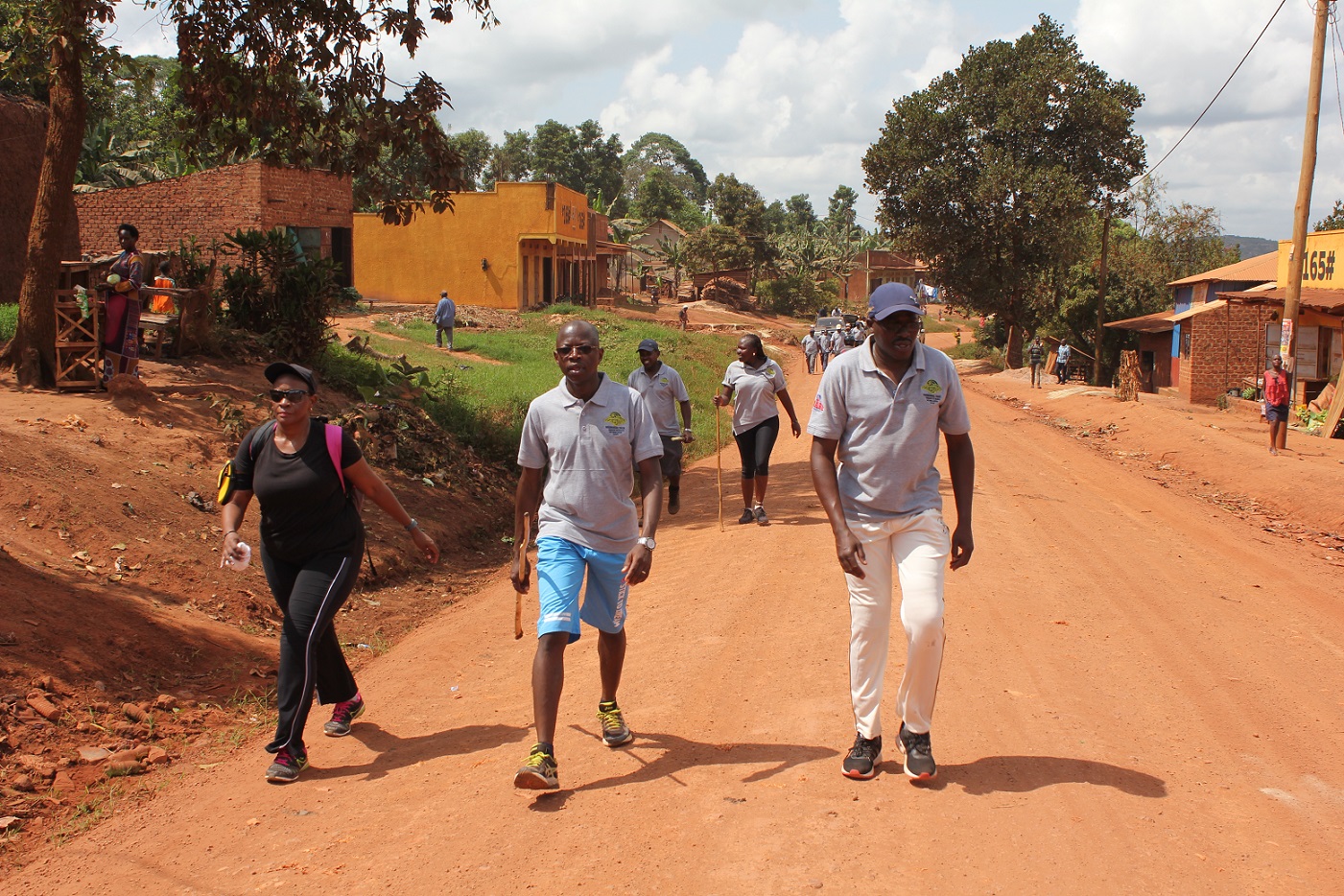 None of the trekkers, most of who were walking without caps and dust masks, seemed fazed and overwhelmed, however. 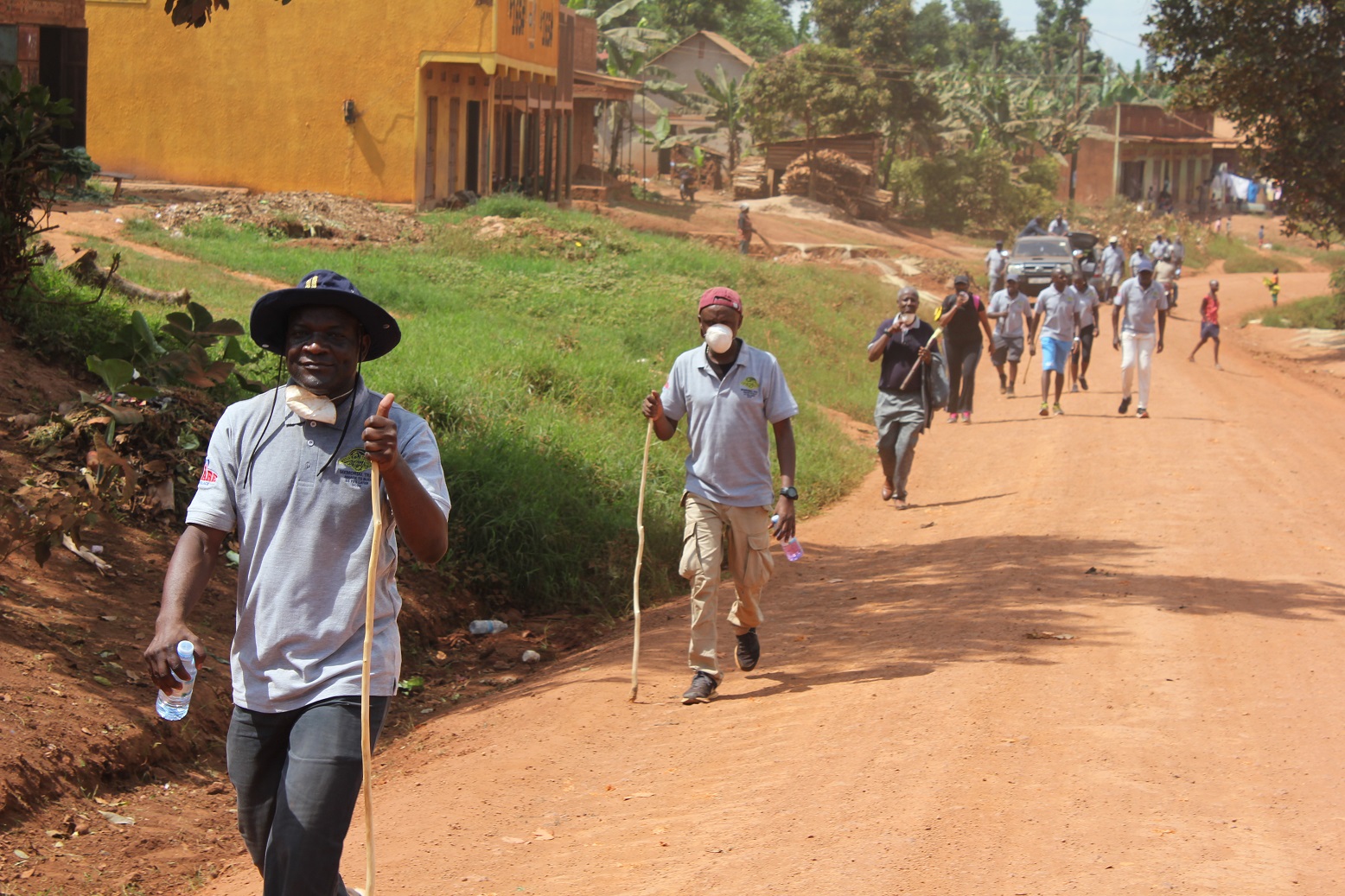 “I am energized,” Brother Aganze said, as our shoes, bags, and clothing got inundated with dust and sweat.

The camaraderie between the College’s old boys as they enthused about how happy they were to retrace the route they run and walked on, spoke volumes. 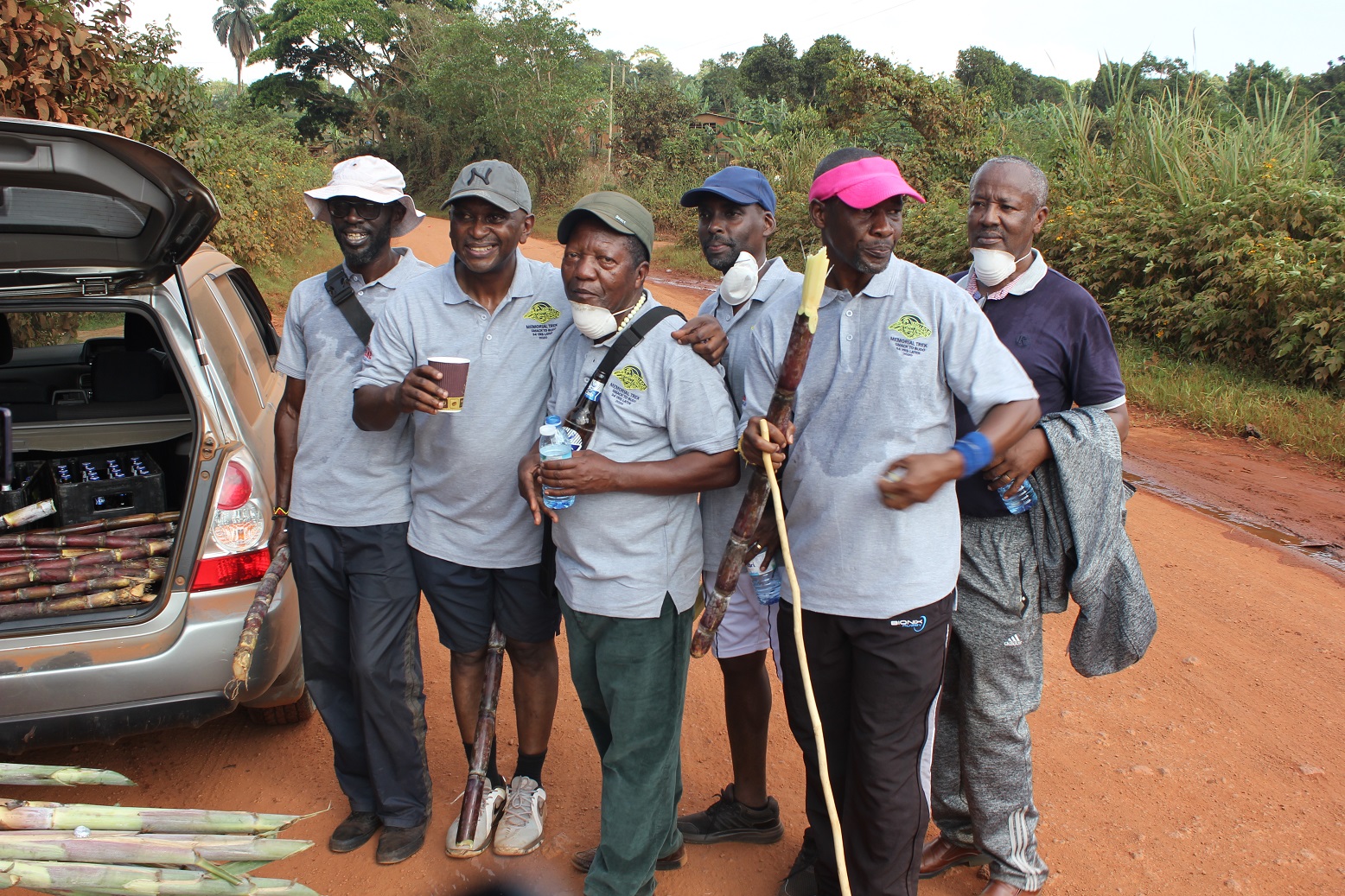 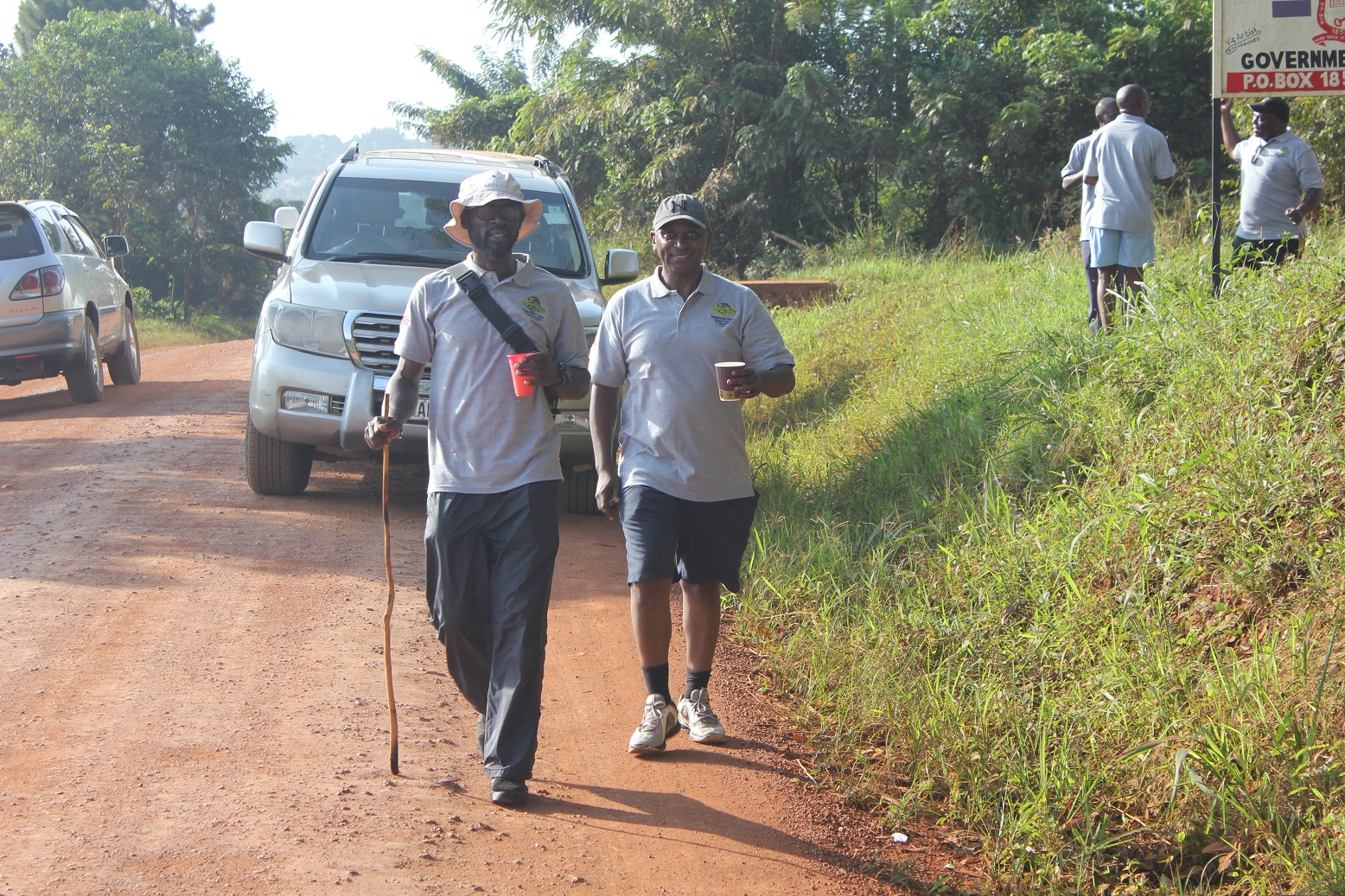 As we stopped at St Peter’s Primary School in Ssisa, Wakiso for a shoe and clothes dust shake off and to replenish on tea and water, I could tell every trekker was trying to cast their mind back to that day when they camped for the night in the open at the school. 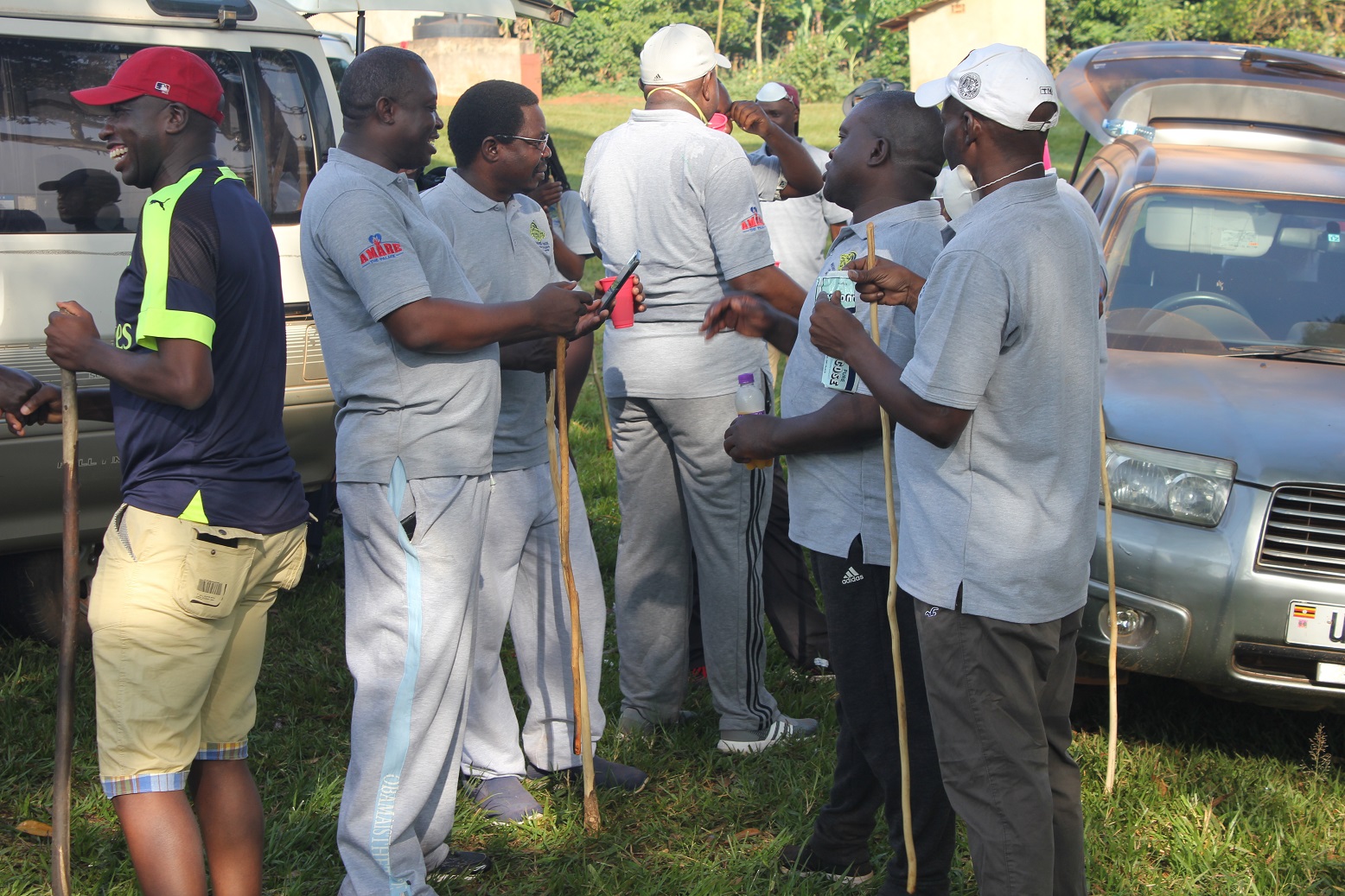 The numbers who trekked and ran, 34 years ago

Brother Francis Aganze, the deputy SMACK headteacher, then says there were about 150-250 students who ran and walked to Buddo that fateful day.

“The College had around 700 students. The previous day, however, some parents, who included government soldiers, withdrew their children,” Aganze told Masaabachronicle

The students arrived at Buddo at Sunset, a day or so before the NRA captured power. As they walked and ran to Buddo, they were accosted by good Samaritans who offered them free goodies such as sugarcane and pancakes.

“We accessed Buddo from the back of one of the girl’s dormitory compounds. Some of our more agile colleagues had arrived earlier and had already settled in. We were warmly received and offered a dinner meal of boiled maize mixed with beans. Later some Buddo students offered half their mattresses for us to sleep on,” Magona remembers.

“I was only 15 then but I was in great pain, when we got to Buddo,” Odaga reminisces.

The students spent two days at Buddo. Buses hired by the Buddo administration later took them to Kampala.

On the trek reenactment day, many of the trekkers trod sturdily as we paced through the different trading centers, they walked and ran through, three decades ago.
Before reaching Nsaggu trading center, trekkers replenished on sugarcane as they reminisced on the grueling experiences of that day. 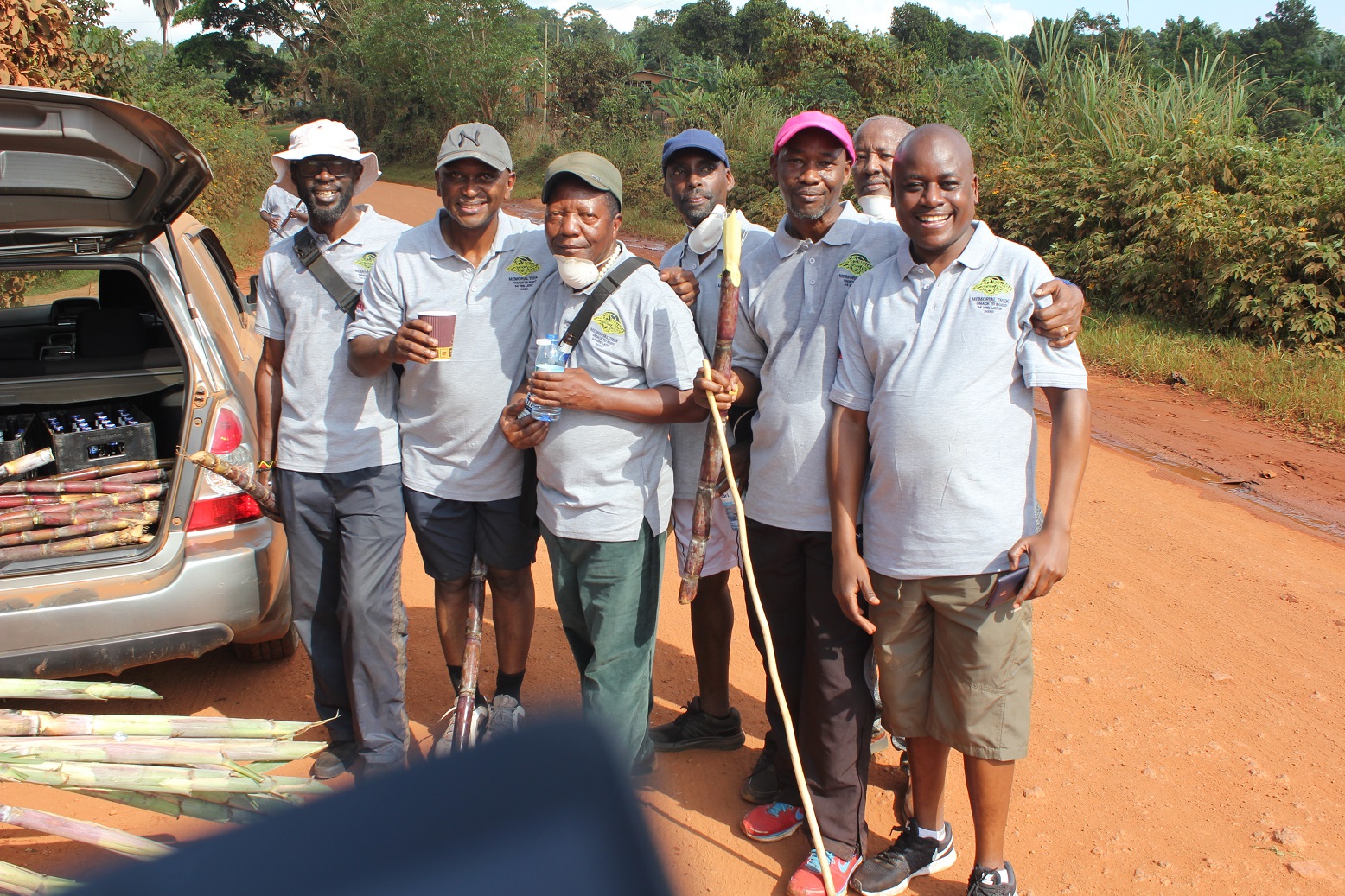 In the towns they passed through, curious onlookers plied them with questions, eager to find out why they were walking in the scorching sun and for what cause. Come to think of it, what was emblazoned on the T-shirts, the trekkers were wearing was not pronounced enough. 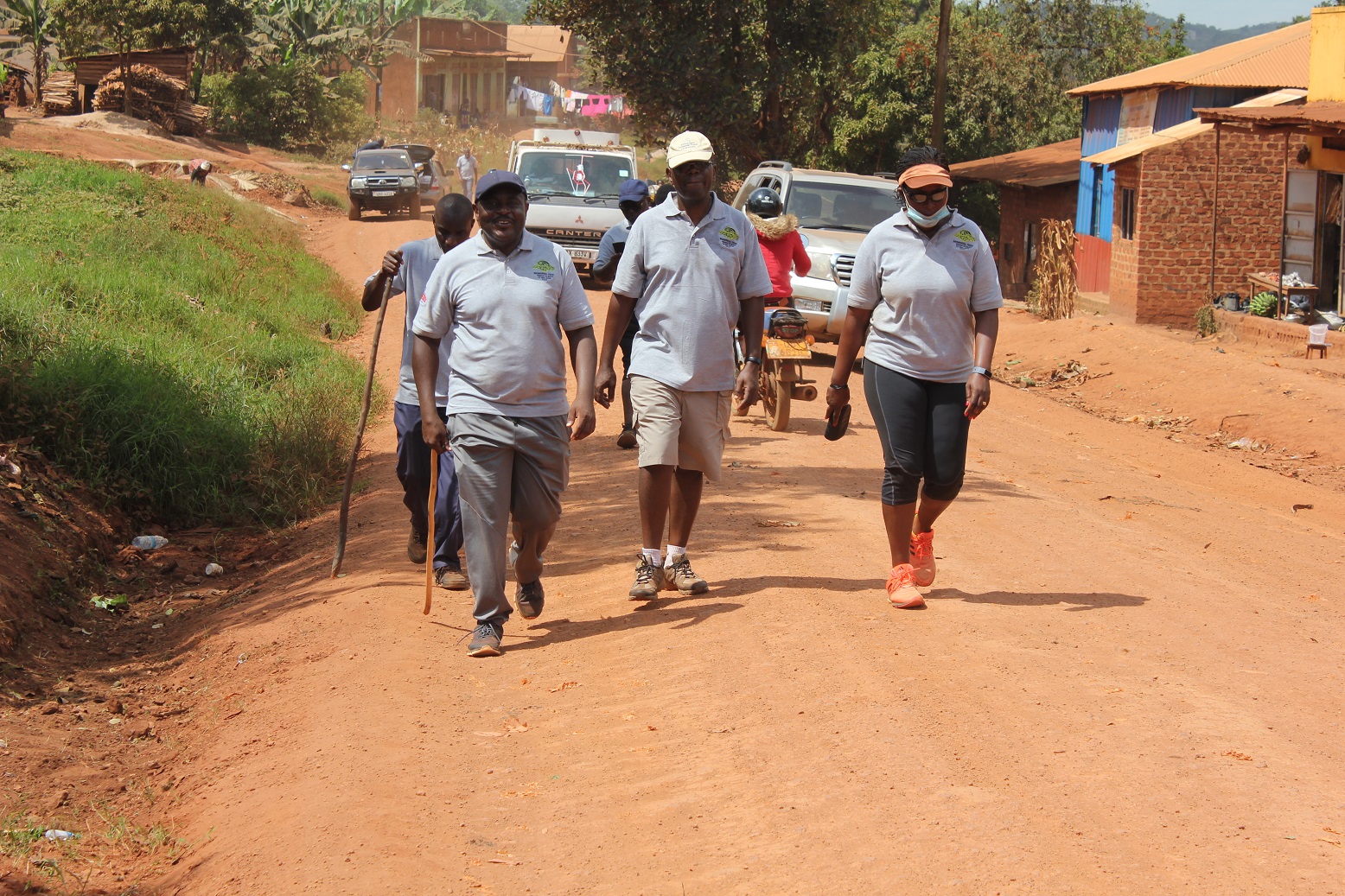 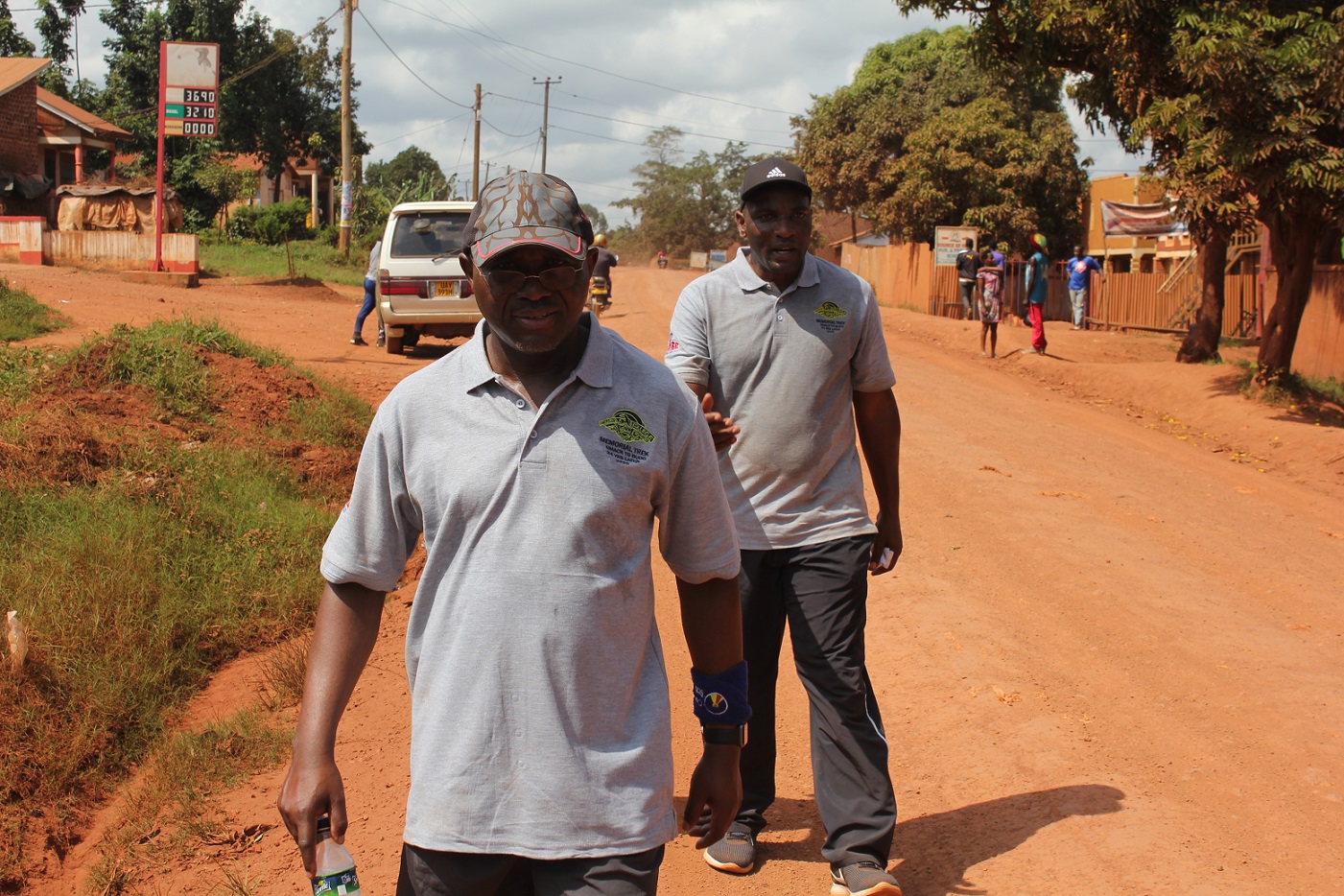 By the time we reached Nsaggu trading center, one could notice that some of the trekkers were low on energy. Fabian Kasi, Godber Tumushabe, Nick Mugira, Charles Odaga, and two other trekkers, however, remained agile.

Kasi, Tumushabe and two other trekkers stayed in the lead pack. They got to the dusty Kasenge trading center, which is roughly 2 kilometers from Kings College before anyone else. By that time, the rest of the trekkers who had split into smaller groups were straining every nerve to catch up. 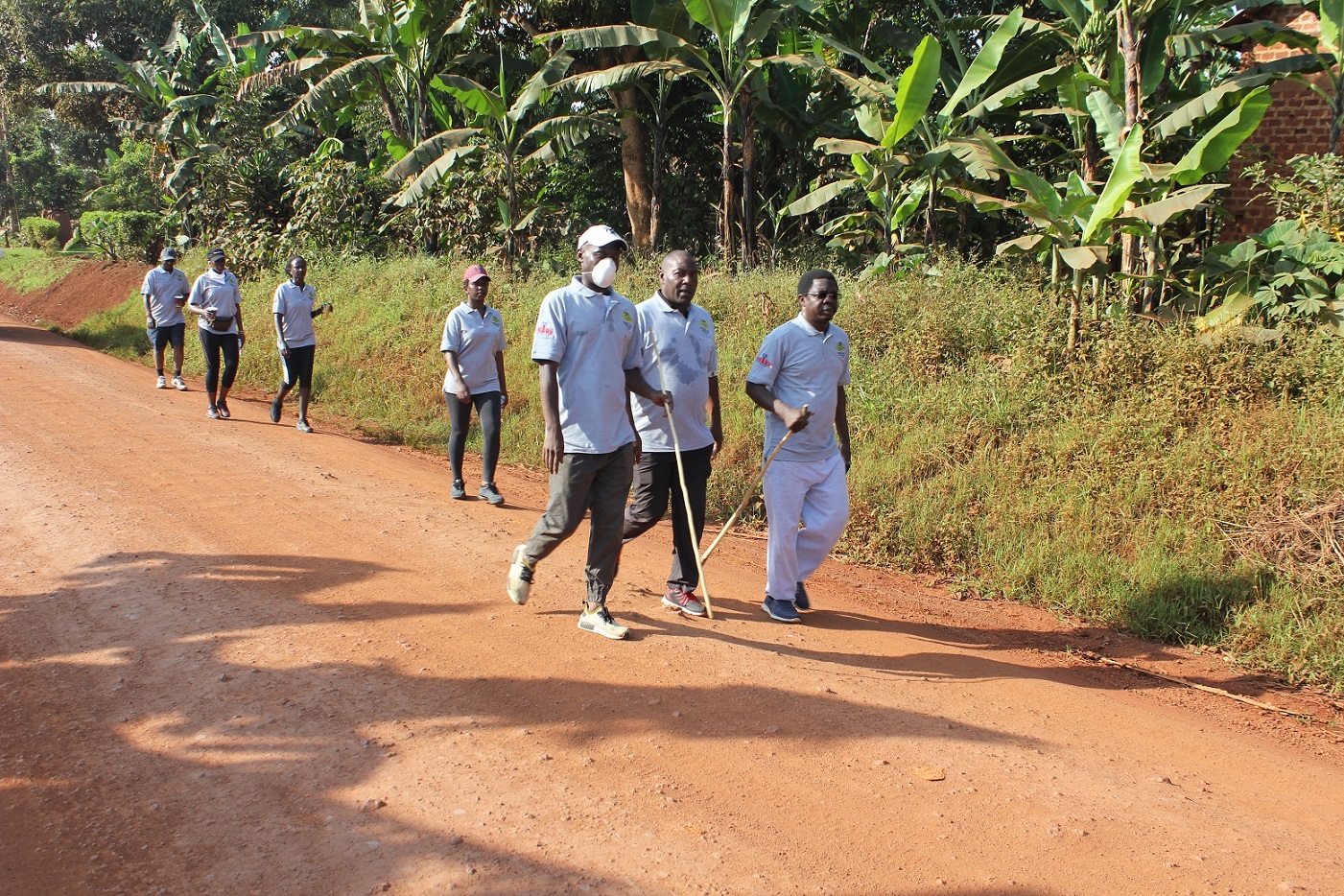 The taxing ascent from Kasenge trading center to Buddo put many of the trekkers to the test, having spent close to four and a half hours on the road.

After five hours of trekking, a few minutes past mid-day, Kasi, Tumushabe and the rest of the lead trek pack got to Buddo. They waited for the rest of the jaded trekkers to arrive and by 12:45, every trekker had gotten to Buddo. 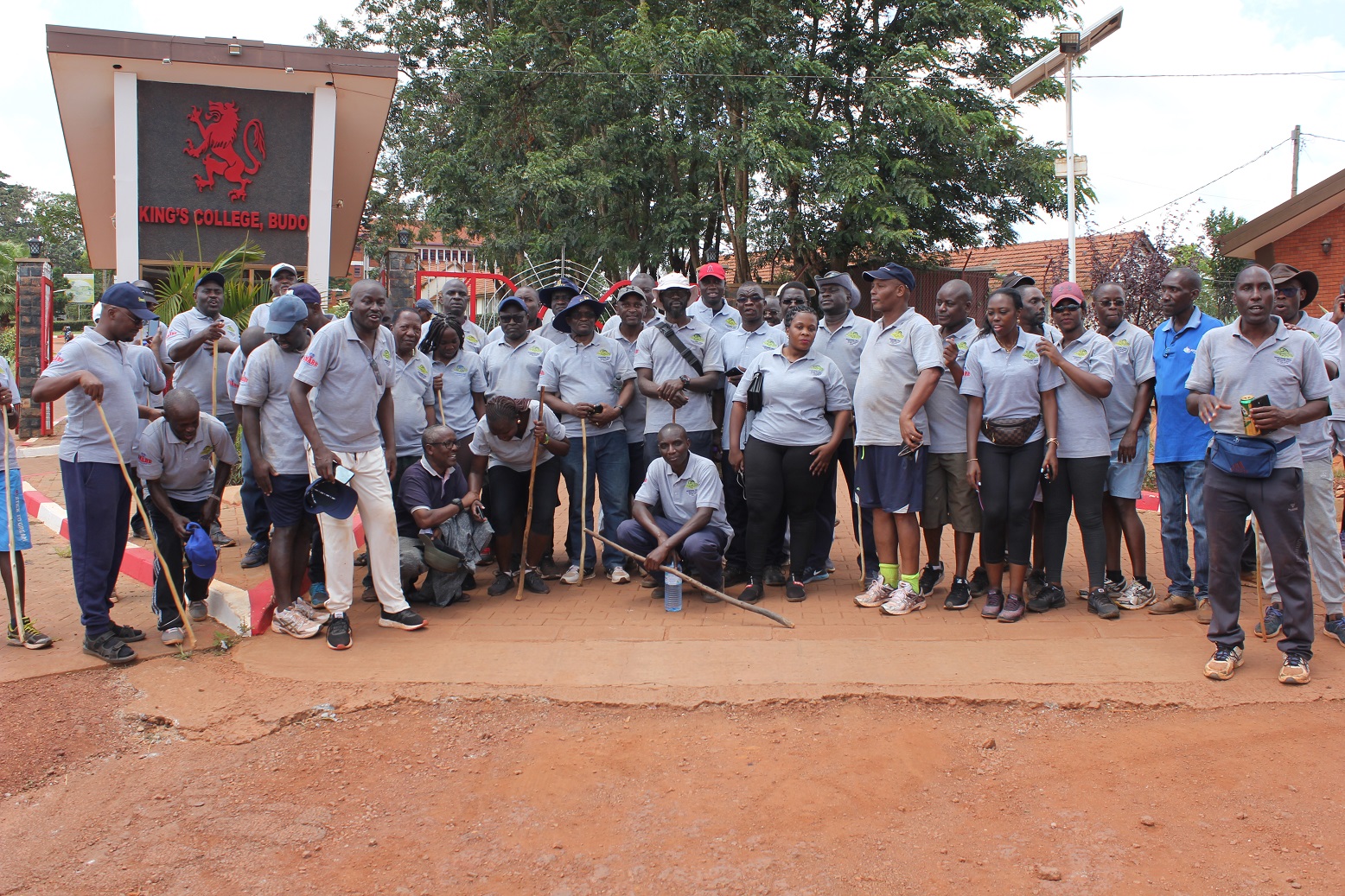 After catching their breath, the trekkers were warmly received by the Kings College, Buddo Headteacher- Patrick Bakka Male and other Buddo staff members in the Buddo visitor reception open area.

“The act of providing sanctuary to our brothers from St Mary’s College Kisubi was done with the best of Christian intentions and we gladly welcome them today as we did three decades ago,” Male said. 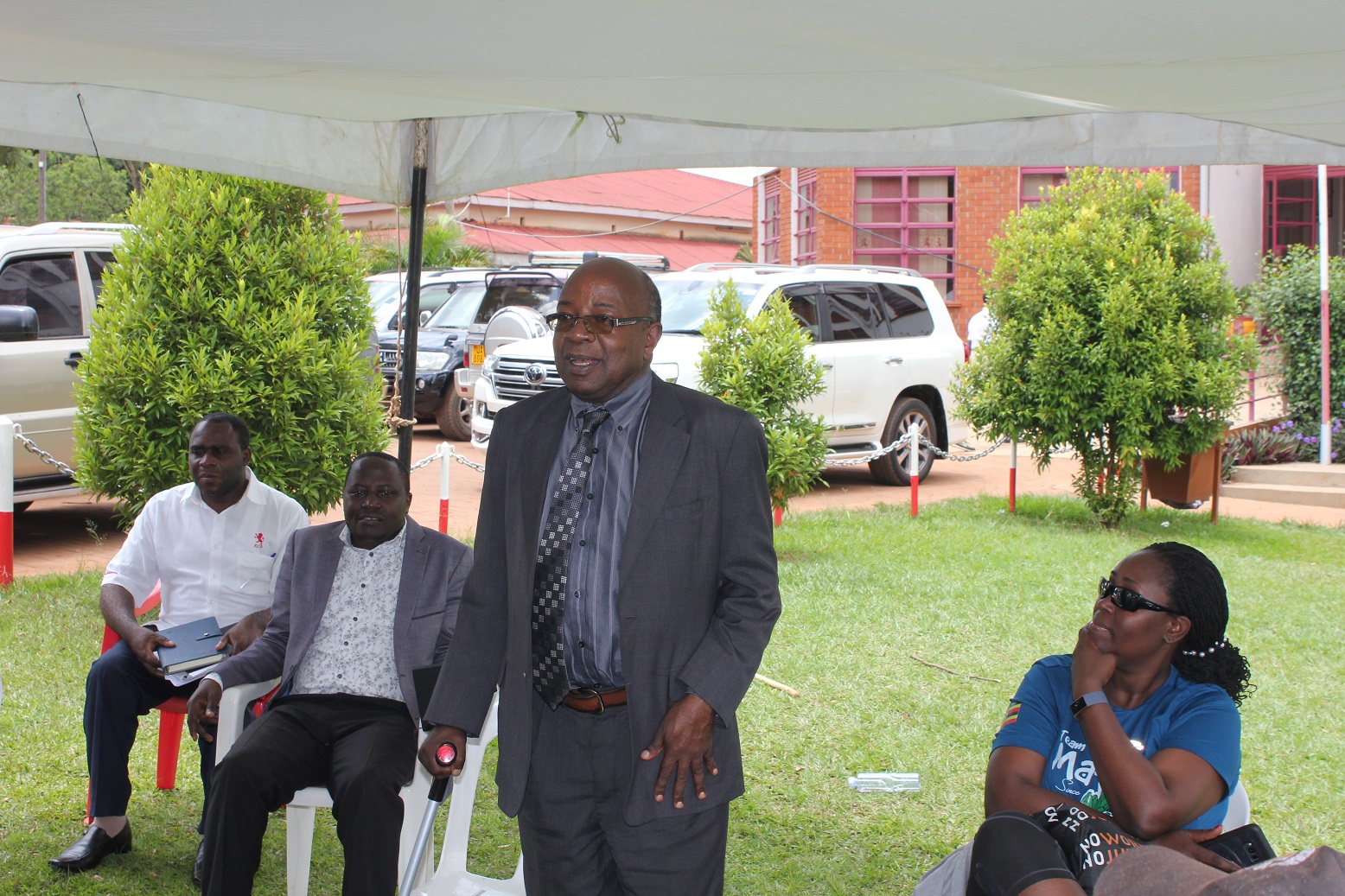 The trekkers were later hosted to a sumptuous meal, which was nothing akin to the rushed meal, they partook on, three decades ago in the Buddo boy’s dining hall.

“The plan for this trek was broached up two years ago by the Happier men-a group of classmates at the time of the crisis. They planned and organised it. We are beholden to Buddo and wanted to thank them for their hospitality when we were in danger,” Odaga said. 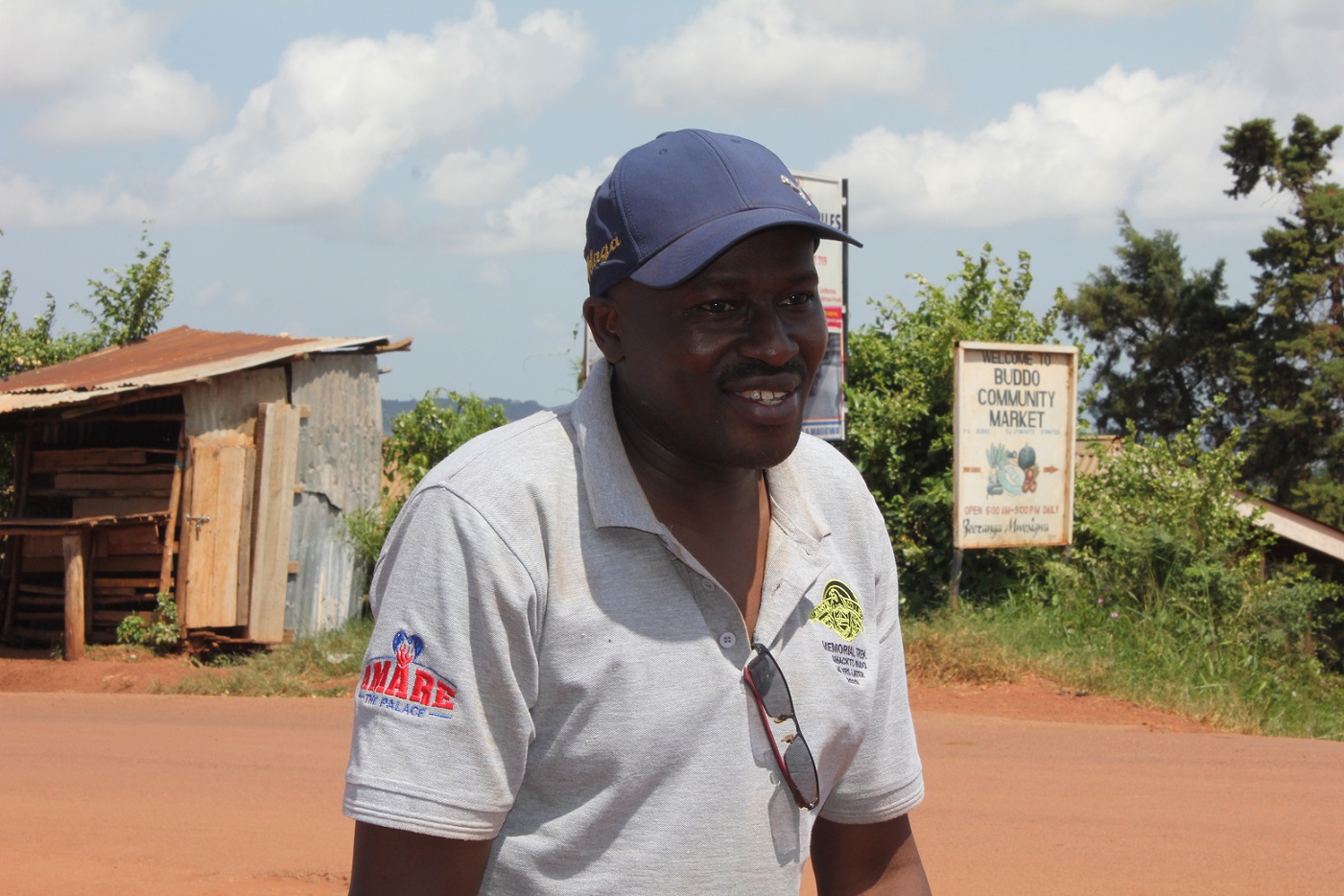 “We plan on making the trek an annual event. This will go a long way in building on the solidarity between the two schools,” Odaga told Masaabachronicle.

The trekkers led by Odaga later handed over a plaque to Male, commemorating the trek and as a token of appreciation for Buddo’s hospitality. 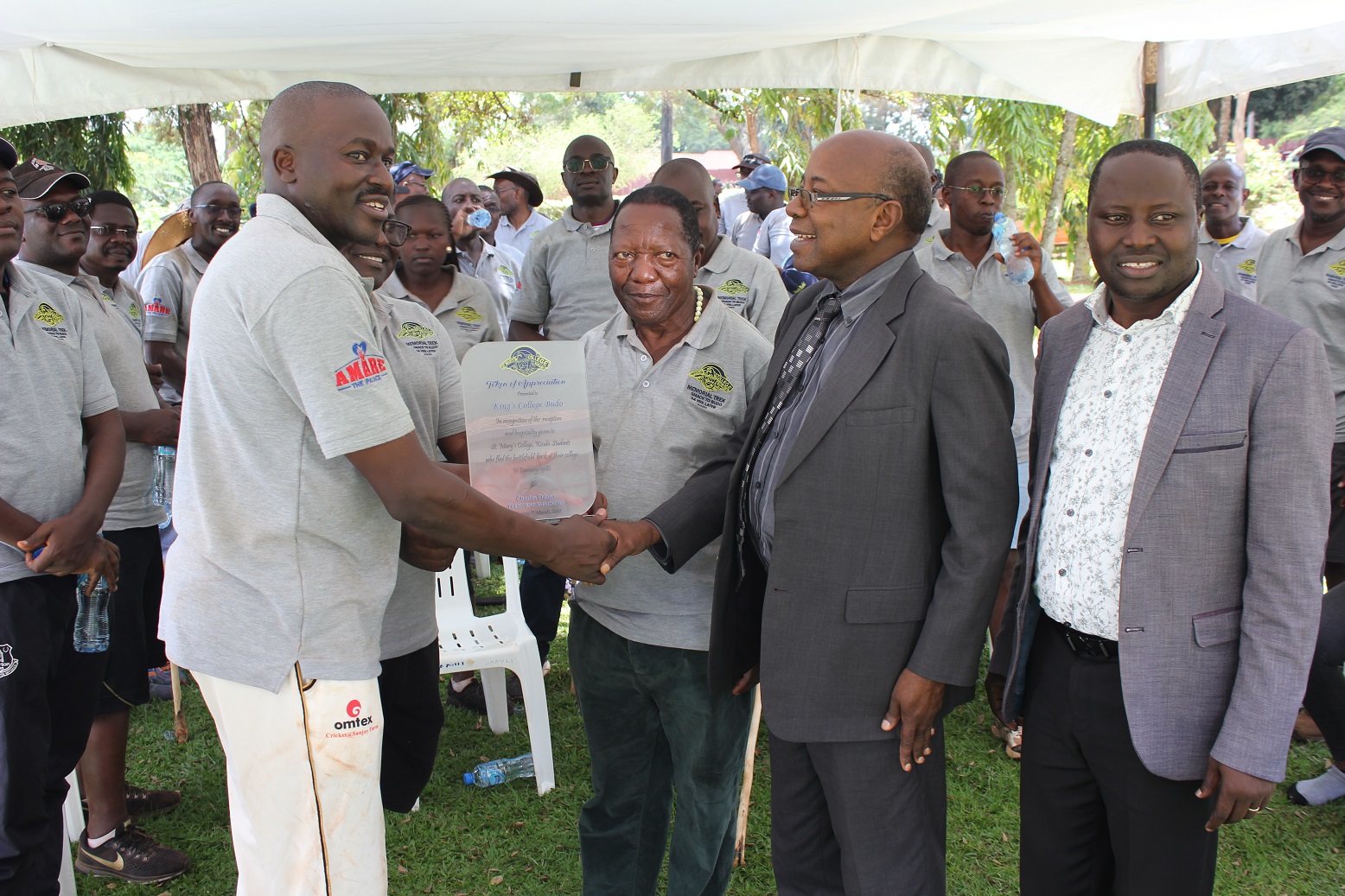