Kyakondo Water falls in Mbale A diamond in the Rough

What fragrance is to a fruit is what beauty is to Kyakondo water falls in Mbale. Seeing is believing and to all appearances, Kyakondo is splendour personified. Its beauty is clad in its amazing topography.

Kyakondo is indeed just one of the few eye candy natural charms in Bugisu that no picture can really express. Yes that is until you see it for yourself. It is what Iddi Masaba, a famous and venerable folk musician in Mbale has fondly described as one of nature’s best physicians in Bugisu.
“Kyakondo took my fancy. It explains why i invariably go there to soul search, parlay and shoot some breeze with friends. It is naturally therapeutic. It is hard to resist the serenity that this place provides. I just shot of my best music videos there too,” Masaba says
Located just a stone’s throw away from Mbale town and 15 minutes from the splendid Mountain Wanale, Kyakondo’s voluptuous and reverberating waterfalls, seem like the proverbial speech of angels, just the kind to wash away the stresses and worries of everyday life, that is if you subscribe to the idea that water is therapeutic and can provide psychological benefits.

If Recreational activity, relaxation and meditation are your fascination, giddy up, come while away and stand a treat of Kyakondo’s balmy scenery and tranquil backdrop. If the recreation you and your friends or you and your significant other, fancy or have planned for is a picnic, a retreat, a jaunt, small party, photography and camping, come have a slice of Kyakondo.

Kyakondo is not by any long shot, a cut above or fully developed facility wise like Sipi falls in Kapchorwa, but you can bet your bottom dollar, it is not as boring as ditch water either. Khanagwa Bumali Christine, a Kenyan student in Mbale says what captivates her about Kyakondo are not the facilities but the ambience.
“The ambience here is just as good as the early morning fresh air. You will not find many tents and people here often but it is a good place you can relax at to your satiety. Whenever i’m here, i feel like the world is my oyster,” Khanagwa says.
If indeed the spice of life is variety, deem it necessary to come pay Kyakondo a visit. The low down is that it will surely fit your leisure bill and leave you spell bound.

Located in Nabisa Village, Bumboi, Kyakondo’s waterfalls are part of River Namatsyo, a river that flows from Mountain Wanale. Mohammed Khabuya, an elder in Nabisa says
“River Namatsyo flows right from Wanale to other far off places like Bugwere and Busoga. No one knows exactly how the name, Kyakondo came about. It is handed down from the days of yore. It is virgin territory because not so many people know about this place, yet it is a good place if one wants to unwind and relax,” Khabuya says 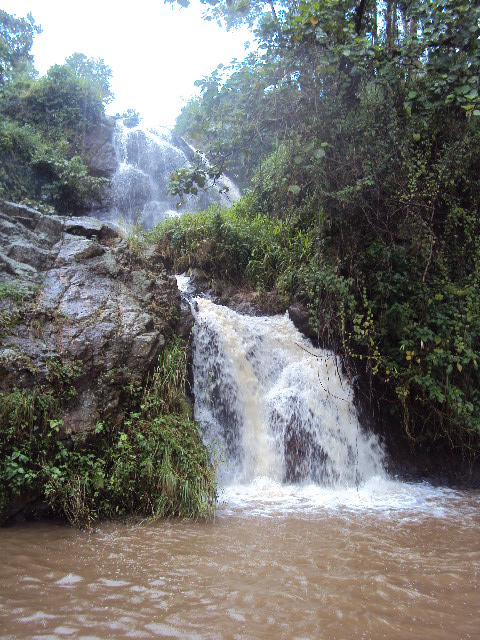 Just like many other beauties of nature in Bugisu, Kyakondo has been glossed over by the local authorities and the rank and file. “This place could have been developed into a viable tourist site but as it, nobody has taken thought of that. That however has not stopped some visitors, principally Banzungu, Kenyan students and Indians from coming here often,” Khabuya says
Kyakondo is also a water reservoir for the National Water and Sewerage Corporation. According to Khabuya, the Reservoir was established in 1937. “The whole of Mbale is fed off water from here. The reservoir serves unpurified water to the water supply in Mooni, where it is then treated and purified,” Khabuya reveals.
During the Imbalu year, we bring our candidates here for the Isonja dance. Isonja dance is where the Imbalu candidates are put through the Imbalu dance training mill and are also shown the items they will wear when performing imbalu rituals. Khabuya says
The media houses in Mbale hardly ever talk about places like these. All they do is advertise music concerts and play music, yet they would be contributing a lot to local tourism by promoting tours to sites like Kyakondo. They are the reason few people are cognizant about this place. Hopefully from now on, Kyakondo will rise from obscurity to fame. A smiling Khabuya says 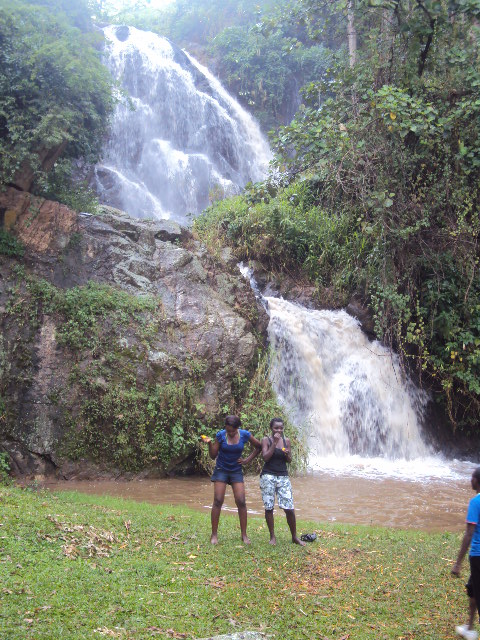 To get to Kyakondo, follow the Busamaga-Bumboi-Wanale route that begins immediately after the high court in Mbale town.
After the Busamaga housing estates, ask for directions to the Elgon suites.
From there, either ask for directions from the locals or from the personnel at the Elgon suites.
From the Elgon suites, it is a 5 minutes’ walk to Kyakondo.
From Mbale town, the whole journey will take roughly 10-25 minutes.
Kyakondo can also be accessed from the route that leads up to Mukhubu suburb, which is near the Presidential lodge in Mbale.
Immediately you reach Mooni Primary School in Mukhubu, ask for directions. From Mooni Primary School, it will take you 5-7 minutes to reach Kyakondo.
Careful though, wear sturdy shoes when you set off for Kyakondo, especially during the rainy seasons.

ACCOMODATION
Affordable accommodation is available at the Elgon suites on the Bumboi-Wanale road, just near Kyakondo.
There are also nearby hotels that offer decent accommodation like Restville hotel.
Relatively cheap rest houses and inn’s are also quite many in Senior Quarters, Mbale.