Vicky Amoding is a happy go lucky nurse; the kind who easily makes friends, not only at her work place, but also at her place of abode.

The 31 year old’s easy going nature has endeared her to many, but, unfortunately for her, some of the endearments have come in the form of subtle and sometimes, overt sexual overtures from men she works with.

Amoding, who works at one of Jinja’s big health facilities, has admittedly turned down several of the advances and, as a result, has made enemies.

“Some men take my easy going nature to mean a willingness and openness to engage in sexual indiscretion. I have been at the receiving end of crude sexual jokes, from several unscrupulous men I work, because of objecting. The men know they can get away with it, scot-free because there are literally no rules and regulations that can bear down on them, even when you report to a higher authority,” Amoding tells Masaabachronicle.

Amoding’s story may read like an isolated case, but, by all accounts, it is not.

Several of her collegues have also silently fallen victim to sexual harassment.

Hellen Mukimba, a colleague of Amoding’s, has a similar narrative.

Harassed several times by debaucher bosses who have insisted she will not progress in her nursing career, unless she predisposes and copulates with them.

The stories of Amoding and Mukimba are ostensibly, just a fraction of several other sexual harassment cases that are rife in Uganda’s health sector.

A 2012 Ministry of Health Gender Discrimination and Inequality survey [GDIA] revealed that 32.1% of female health workers had experienced some form of sexual harassment, at their workstations.

In 2016, a sexual harassment Formative Assessment, carried out by the Ministry of Health and IntraHealth International, an international nonprofit organisation, dedicated to working with developing countries to improve their public health capabilities; revealed that sexual harassment in Uganda’s health sector starts during recruitment of health workers and continues in the workplace.

The Assessment indicated that the vice is mainly perpetrated by men in positions of power in recruiting positions. 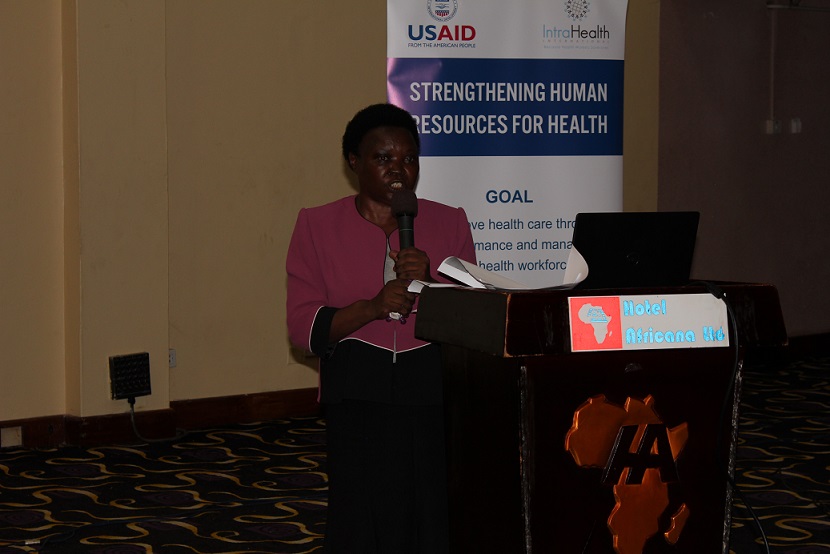 Rebecca Nabwire, the Principal Labour Officer, in charge of Inspectorate at the Ministry of Gender, Labour and social development says the high prevalence of sexual harassment in the health sector, casts a slur on the country’s health sector.

“By our statistics, more than one in 6 women in the country’s health sector has fallen to sexual harassment, which is another form of gender-based violence. Sexual harassment is a widespread vice and a big number of cases often go unreported because victims are indisposed to reporting, due to fear. In many ways, this vice taints the image of the country’s health sector.”

Reasons why sexual harassment in the health sector is rife despite laws in place.

Dr, Diana Atwine Kanzira, the permanent secretary at the Ministry of Health says sexual harassment continues unabated in the health sector on account of the unscrupulous nature of some senior male medical staff.

Speaking at a recent workshop, where she launched the human resources for health tools and guidelines at Hotel Africana, Kanzira castigated men in positions of power in the health sector who take mean advantage of young female nurses.

“There are shameless men taking mean advantage of young nurses. They cajole and want to copulate with them as a means to raise their salaries, to give them promotions or jobs. This is unacceptable,” Kanzira told Masaabachronicle.

“Many victims are not partial to the idea of taking about such vices openly but that has to change. There are many young women who are invariably harassed in the health sector but they irresponsibly keep silent. The lack of reporting mechanisms is actually feeding the beasts who perpetrate these crimes. The issue has to be addressed in earnest.”

Simon Mugalu, one of the health ministry experts who drafted the human resources for health tools and guidelines, says sexual harassment has persisted in the health sector, principally because of lack of awareness, misuse of power and the limited implementation of laws.

“Harassers operate with impunity because in most cases, the victims are not cognizant of the laws in place to deal with sexual harassment, such as the Public Service Standing Orders 2010, Employment Act (2007), and the Employment (Sexual harassment) Regulations (2012),” Mugalu says.

“The legal and policy frameworks above mandate the government to take all necessary action to ensure that all health facilities and institutions adopt a comprehensive zero-tolerance approach to sexual harassment.”

How sexual harassment impacts on victims

“These adverse psychological consequences are all risk factors for various chronic diseases. Various studies have also showed that sexual harassment doubles the risk of psychological distress for women, than it does for men. The other negative effects for victims include intentions to leave work, low productivity, absenteeism, little work morale and low career progression ambitions,”

The global ME TOO movement; a movement against sexual harassment and sexual assault, notes that sexual harassment prevents employees reaching their full professional and personal potential and accentuates gender-based inequalities.

The different forms of Sexual harassment

Nayebare adds that mediocre responses to sexual harassment in the health sector, have in many respects, exacerbated the situation.

“In many instances, perpetrators who are accused of sexually harassing their juniors pass the blame instead to the people they harassed. This victim blaming is a ploy. One of the blame constructs has been indecent dressing. The victimization, most times, has a negative effect.  Victims predispose to fear often times, when their cases are dismissed.
The shame, blame and gossip that follow usually have a depressing effect on victims.”

The Ugandan Health Ministry's strategy to fight the vice

One of the new strategies the Ministry is fronting is a toll free call center platform where victims or vulnerable young nurses, can call in confidentiality and report offenders.
The toll free line-0800-100-066.

“That line is in operation. All calls with complaints of sexual harassment shall be directed to the sexual harassment focal point person at the Ministry who will direct the complaint to the appropriate person/body for further handling,” Mugisha told Masaabachronicle.

The health ministry, in collaboration with IntraHealth Uganda, also recently developed guidelines on the prevention and response to sexual harassment, which are currently being distributed in all health facilities across the country.

In a foreword in the Ministry of Health Publication entitled-“Guidelines to Implement-The policy on prevention and response to sexual harassment” Doctor Ruth Aceng, the Minister of Health says the guidelines will assist and guide users in implementing effective and standardized mechanisms for prevention and response to sexual harassment complaints in the health sector at all levels.

The guidelines she concluded will help improve work conditions, workforce productivity, retention and morale of workers in the sector.

By all accounts, the health ministry is also planning on orienting and training all regional referral hospital heads and health sector employees on the management procedures of sexual harassment complaints.
At the recent workshop launching the human resources for health tools and guidelines, held at Hotel Africana, several regional referral hospital heads made commitments towards implementing the sexual harassment guidelines.
For good measure, the health ministry also plans on integrating anti sexual harassment training into the curriculum for pre-service and in-service healthcare professionals.

“The health ministry in tandem with the Gender Ministry are also planning to conduct gender-responsive research that will highlight the root causes, consequences and complexities of sexual harassment so as to develop appropriate, gender responsive interventions that reduce its occurrence,” Mugalu told Masaabachronicle.

The World health organisation in its International day for the elimination of Violence against women-message on 25th November, 2018 noted that violence against women including sexual harassment is one of the most widespread, persistent and devastating human rights violations in the world today.

The WHO notes that the vice remains largely unreported due to impunity, silence, stigma and shame.

A Uganda Human Rights Defenders Association (UHRDA) survey carried out in 2013 in 2,910 organizations indicated that 90 percent of women are sexually harassed at their places of work by their male seniors.

Experts note that if the sexual Offences Bill is passed, it will strengthen protection for women and girls from sexual abuse and exploitation.