Hip Hop dance theatre gets its moment in the spotlight 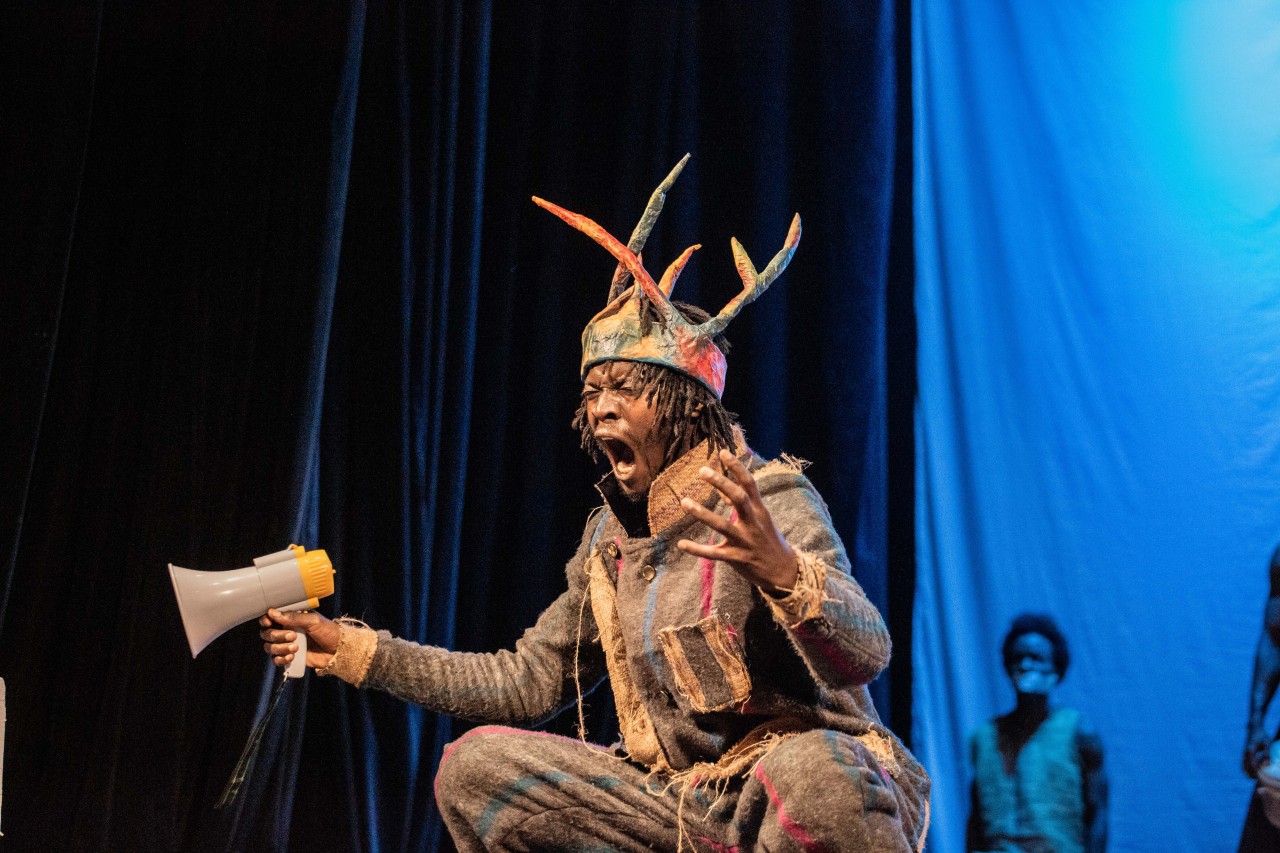 With the "False manifesto, history is not the past "  show, Award-winning Ugandan breakdance choreographer and dancer Fazil on Yu and his Spot lite crew demonstrated that Hip Hop theatre plays can fit flawlessly into the world of theatrical performance 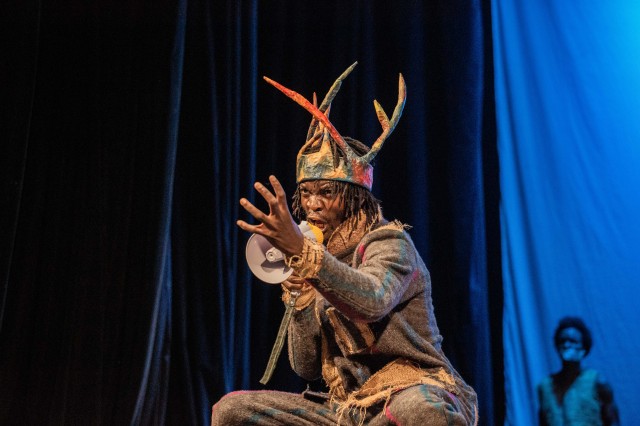 In the picture-Fazil on YU performing a spoken word poem

With their expressivity, the "Spot lite" crew demonstrated that it was feasible to employ spoken word and Hip Hop aspects like b-boying (also known as breakdancing) to tell both old and new stories while still drawing a sizable audience.

A gutsy Fazil and his crew thrilled the audience with a repertoire of stylized footwork, acrobatic breakdance backflips, head spins, beatboxing (the art of creating rhythms and sound effects with the human voice) and soliloquies addressing topics such as climate change, politics of the belly, deforestation and Africa's stolen history. 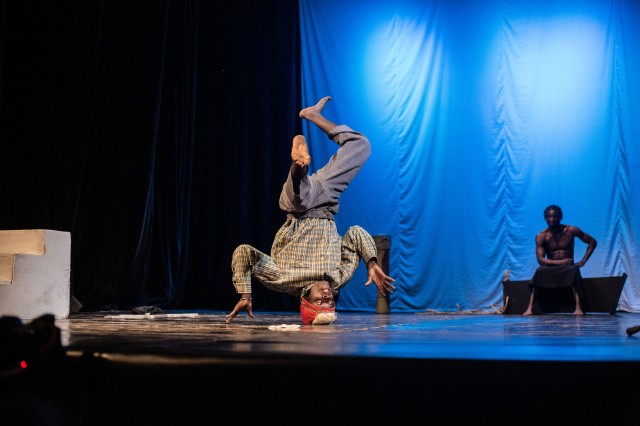 In one of his poignant but short soliloquy skits, which was in line with the show's theme, Fazil spoke about false philosophies imposed on Africans and why history was a lie.

It seemed to resonate with the crowd who had earlier watched a short documentary film footage of Iconic South African musician Miriam Makeba debunking the idea that the white man wrote Africa's history. 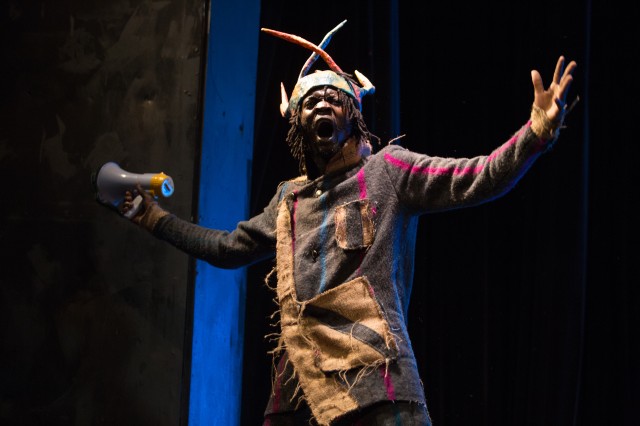 Fazil is hoping to stage more shows in the country and abroad and believes the Hip Hop Theatre experience can be a key to connecting youth with theatre.

"Hip Hop Theatre is becoming an important new voice for the youth. Stories of struggle and other human experiences told through Hip Hop Theatre, like those told through other Hip-Hop elements such as rapping or MCing are invariably stories of the young generation and their worldview," Fazil told Masaabachronicle.

By all accounts, a relationship between Hip Hop and theatre existed from the threshold as the genre's beginnings were based on the performer's direct relationship with a live audience (before Hip Hop reached mainstream). 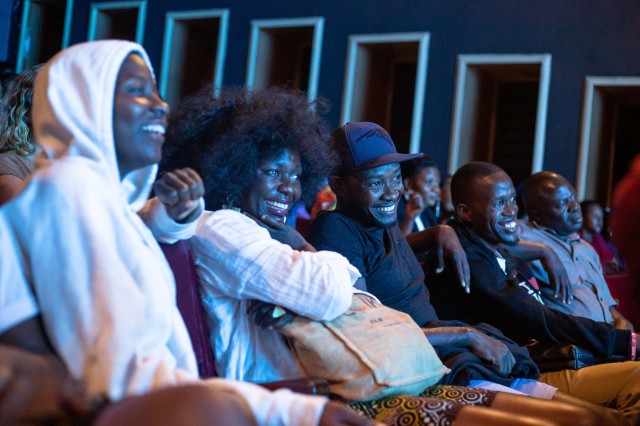 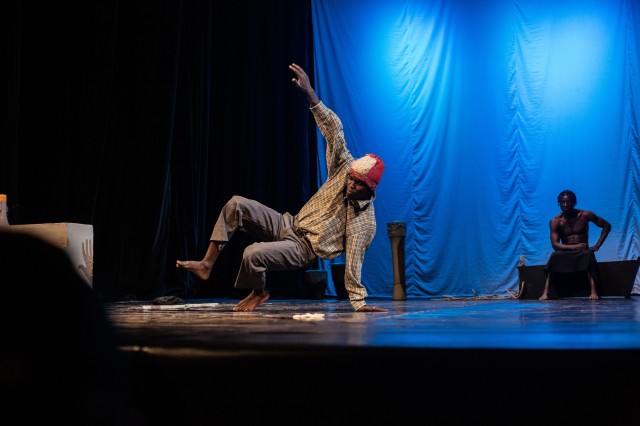 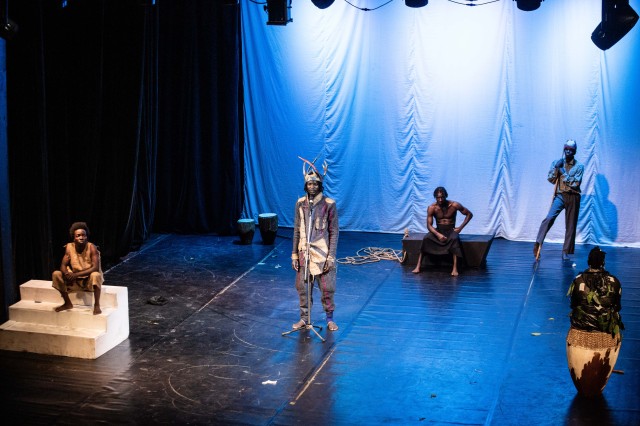 In Uganda, the most common medium, Hip Hop has relied on to express and spread its culture, has been rapping or MCing, however.

At the tag end of May, Ugandan artists who developed an affinity for Hip Hop MCing had their time in the spotlight as they were recognized for their works at the sixth edition of MTN Hip Hop awards, held at the company's warehouse on Jinja road.

For the Hip Hop genre, which has, played second fiddle to other Ugandan musical genres in terms of media promotion, through the years, it was a red-letter day, even though calls for the award organizers to recognize other elements of Hip Hop such as Hip Hop Theatre are growing.

Established and upcoming Hip Hop artists from different regions of the country such as Judas Rap Knowledge, AJ Stlyz and Lagum the rapper, among others were also duly recognized for their outstanding musical works and so were female rappers like Anena "Missy" Ochola, Stone Age Ug and Felister di Superstar.

Female rappers on the come up

Ochola was the second runners-up in the cypher challenge. Like the other young rappers who took part in the challenge, she had to exhibit her gift of gab and rap skills in the form of enchanting bars (Hip Hop phrase for lyrics/punchlines), wit, rhymes and cadence. 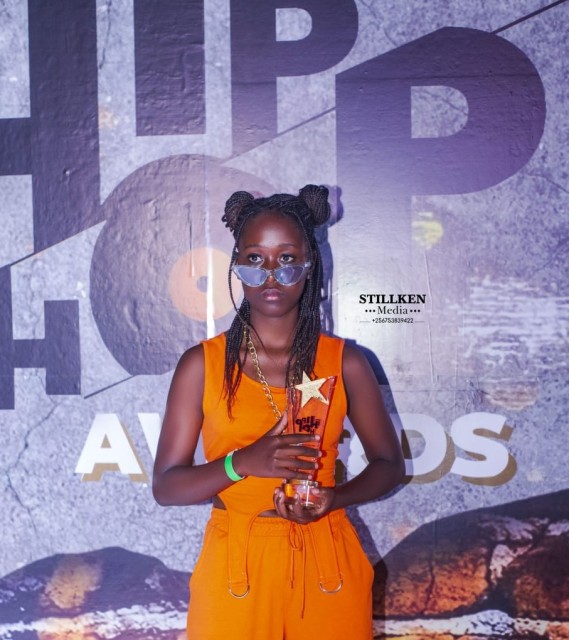 In many ways, the awards which seek to celebrate and amplify the growth of Hip Hop in the country have been a welcome development, not only in terms of raising the mainstream profile of the genre but, also that of hitherto unknown upcountry Hip Hop artists; many of whom are now riding the wave of fame in their respective areas of origin.

"The Hip Hop element of MCing is attracting corporate companies like MTN and the same can happen for Hip Hop Theatre. Maybe it has already happened but I guess not at a level commensurate with what Hip Hop MCing has achieved," Ronald Odongo, a Hip Hop blogger, says.

"For Hip Hop Theatre to be a powerful influence in the theatrical world, Fazil and co, plus others will need to constantly think out of the box and set their wits to work to produce ingenious and mould-breaking Hip Hop Theatre plays. On the evidence of what I watched, I must say, they are still a work in progress." 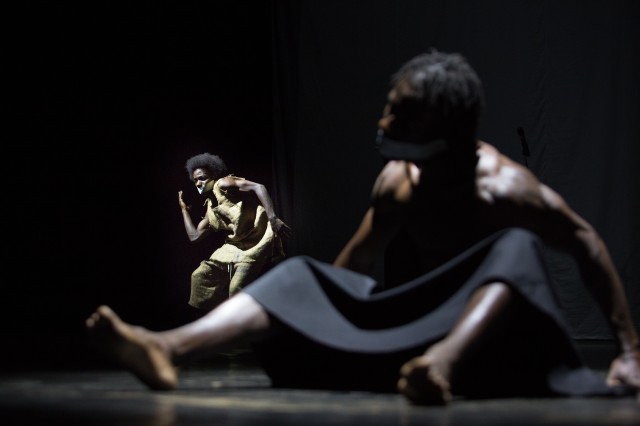 Knowledge's strength is his ability to craft lyrics and rap them fluently and commandingly in both English and Acholi. 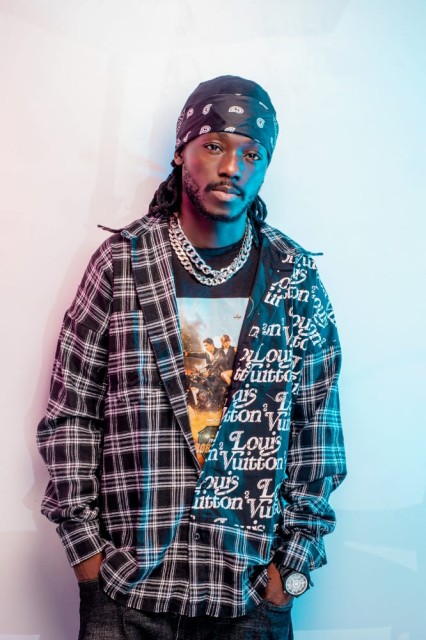 Knowledge has 8 albums under his belt. He has through the years showcased his strong conscious rap skills addressing critical issues such as poverty, war and self-consciousness in many of his songs.

Just like the late Lumix who was, by all accounts, the first genuine Hip Hop star from Gulu, Knowledge has a rising fan base in Gulu and neighbouring districts. He also has a sizeable social media following.

"If there is one person, Hip Hop in Gulu or the north can look up to now, it is Knowledge. His star is in the ascendant on account of his authenticity, "Billy Ochen, the CEO of Soulz of Africa, a record label, told Masaabachronicle.

Benard Ayesiga, also known as Crazie Wispa, a previous winner also emerged as the best from Western Uganda with the song "Mwebale /Thank you". 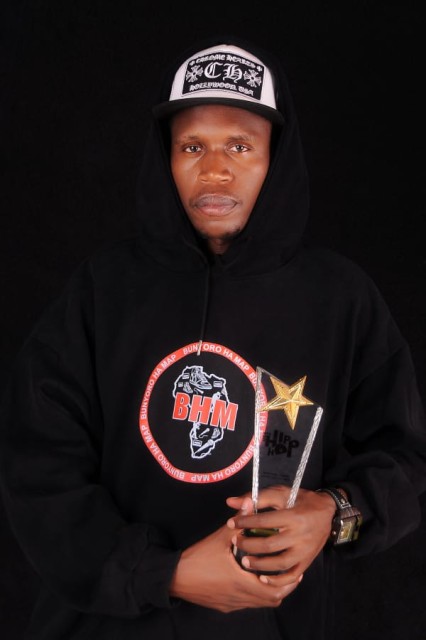 Wispa is from the Bunyoro sub-region, specifically Masindi. He calls his sub-genre "Runyo-flow" or rap in Runyoro.

His earlier song "Bunyoro Hatuli '' created a huge buzz for him in Bunyoro.

AJ Stylz who hails from Tororo emerged as the winner from the East for the song "Put in the work. He also took home the accolade for the inspirational song of the year with the song "Nkowola". 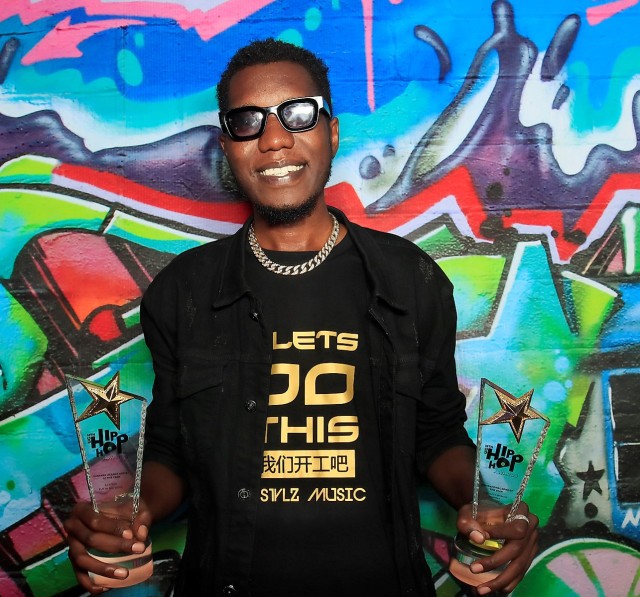 Stlyz, ostensibly started as a battle rapper, participating in competitions such as the Nokia "Don't break the beat" in 2012 and the NTV- "One mic show" among others.

In 2019, he won the award for Eastern Ugandan Artist of the Year in the 256 Hip Hop awards.

From the central region, Felister, Di Superstar emerged as the winner. The 11-year-old whose real name is Faith Nanyanzi started her music career at the age of 4 under the influence of her musician dad, who used the stage name "Wizz Beats". 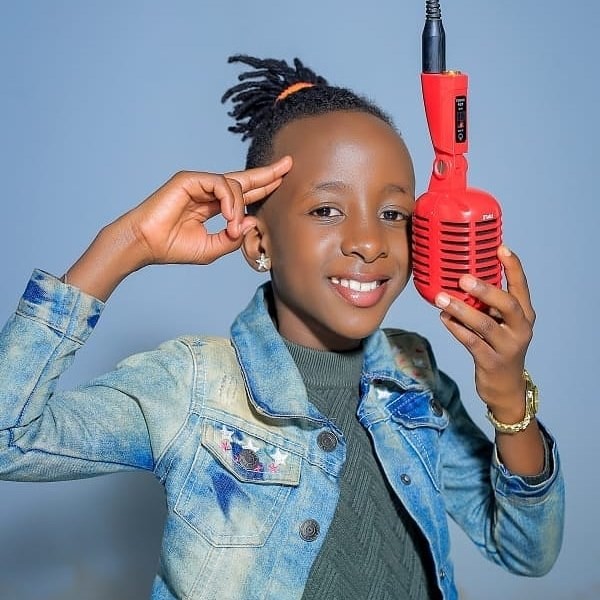 Felista released her debut song "Nawambye" in 2019 and she followed that with "I Can't Breathe" a song that paid tribute to the late George Floyd.

Another female who won big at the awards was 13-year-old Tyra Kirabo, commonly known as Stone Age Ug.

In 2020 she was ranked by the East African Fact Files as the best young female Hip Hop star. In the same year, she was named rookie of the year in the MTN Hip Hop awards.