It is the tag end of Friday and a crowd of gaily men have gathered around a big round pot at Gregory’s lounge in Namatala, Mbale.

As the men converse, a young man comes with a garland of dry banana leaves and two big stones and places them at the rare end of the pot.
The stones are ostensibly to keep the pot standing firm.

There are no prizes for guessing that the men are bidding time to partake on Malwa-a fermented bubbling brownish local beverage, which is in high favour with many urban and rank and file Ugandans.

The beverage which has for long been treasured for its sour lingering after taste and sweet aroma is indisputably Uganda’s most popular local drink.

In the Elgon zone of Eastern Uganda, specifically Bugisu, the Bamasaba call the beverage Bugisu-Kamalule.
It is also called Busera or simply Kamalwa.
In the neighboring Teso sub region, it is refered to as Ajon. 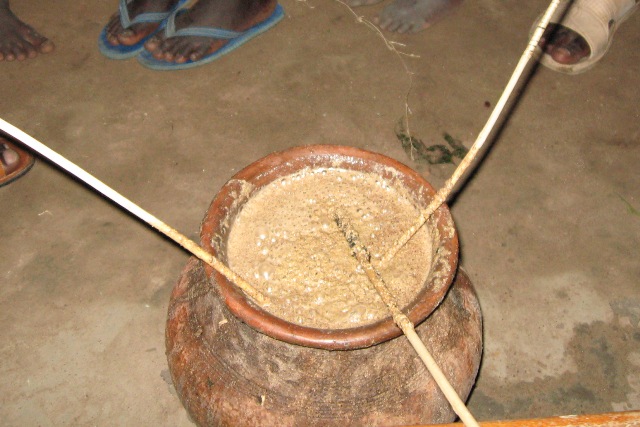 With the cloak of darkness bearing down over Namatala, the men gathered around the big pot; locally known as Kumanje, are each handed long bamboo drinking straws called tsisekhe in Lumasaba.

A lady carrying a 20 litre jerry can full of the beverage then empties it, into the pot, as the chatters get louder.
In an instant, another lady brings a big saucepan full of hot water and pours it into the pot.
She would periodically come back with more hot water to pour into the pot.
Malwa is invariably drunk when it’s hot. 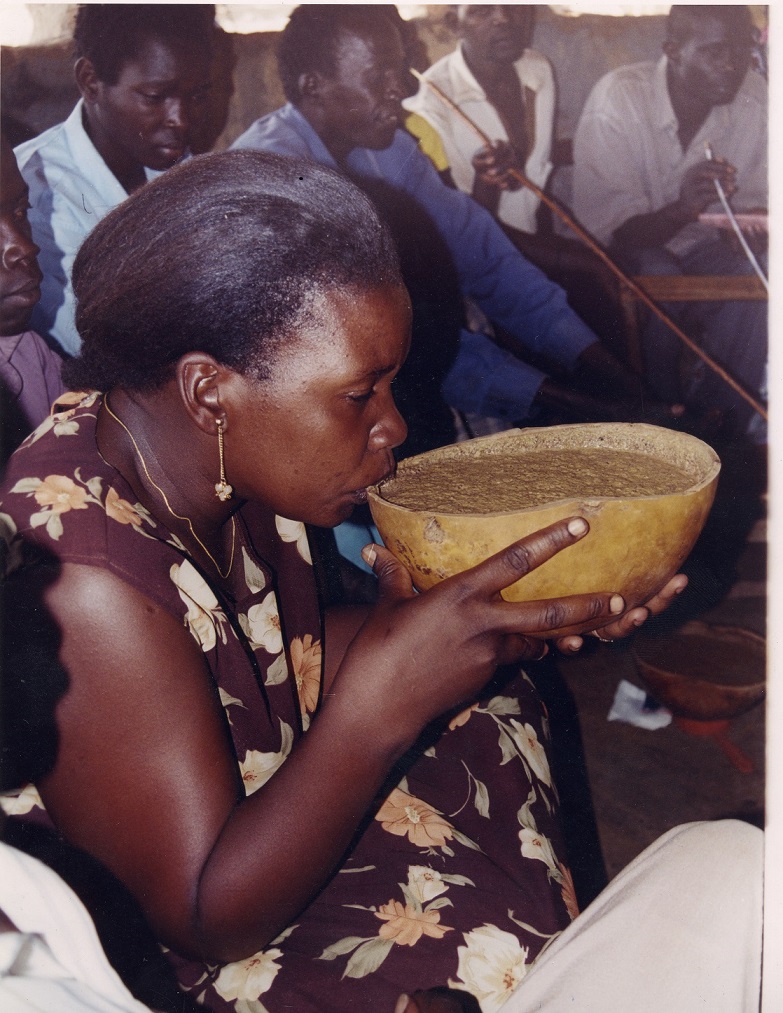 The first time, the lady poured hot water into the pot, the malwa foamed an almost cloudy like outline on top. As if on cue, all the men began guzzling away.

It was almost as if the local beverage was their life and soul. Their happy faces spoke to that fact.

Why malwa is all the rage among Ugandans.

Fred Mukhwana, a teacher and regular patron at Gregory’s lounge says he drinks Malwa because of its high nutritional value.
“Malwa is Africa’s best traditional beverage. Iam inclined to drinking it, because it is a tasty food-grade drink. It has a high nutritional value, being that it is made out of maize, which is a good source of dietary fiber and protein. When I drink Malwa, I hardly ever get hungry. I can actually go the whole day without a meal,” Mukhwana says. 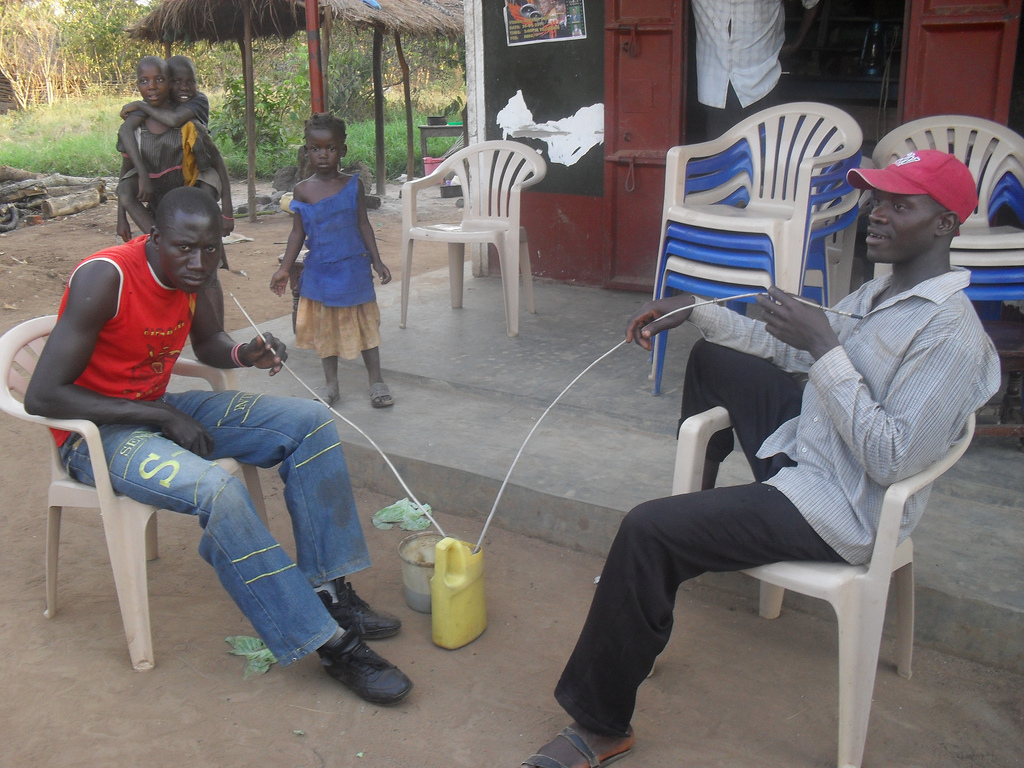 Patrick Okwalinga, a water engineer in Kaberamaido says he is partial to Malwa on account of its social and therapeutic values.
“Malwa is a traditional part of life in Teso. Socially, you are able to interact and brainstorm on many issues with many other people. A gathering around a Malwa pot is like a meeting of minds. On the therapeutic front, it is an antidote to all the stresses that come with everyday living,” Okwalinga says.

“Malwa is the perfect social drink. You get to network and interact with many people of different persuasions,” Gideon Omollo, a radio host in Kumi says. 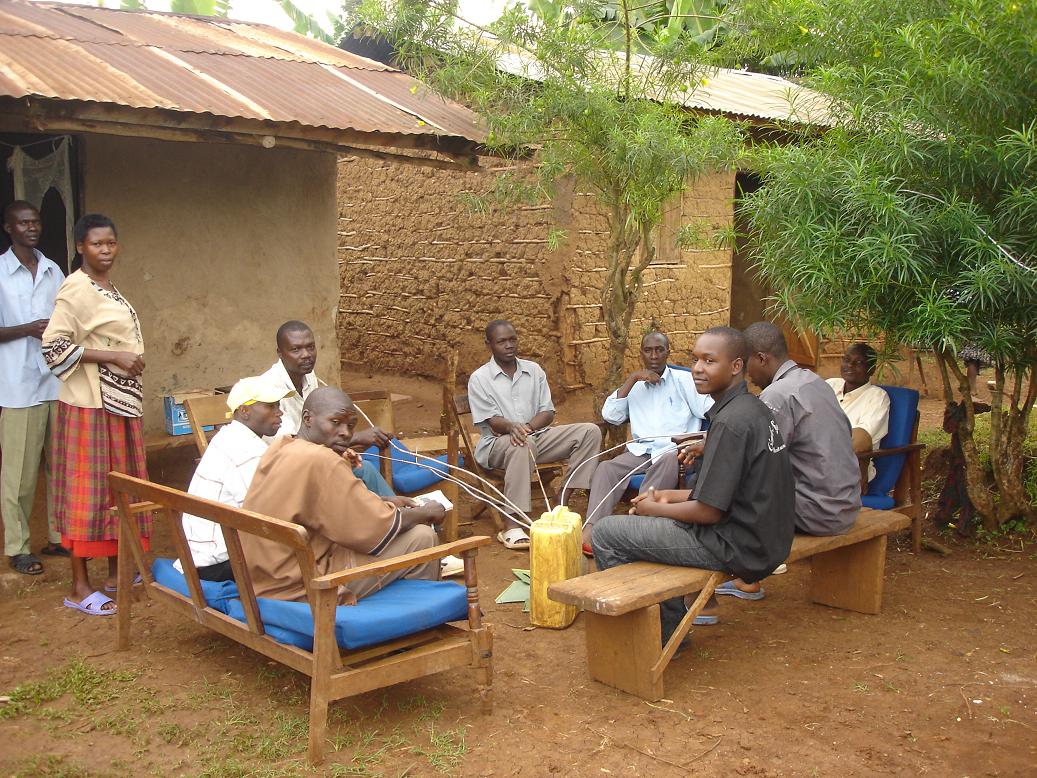 The Origins
Like many other African traditional beverages, Malwa’s origins date back to the pre-colonial times.
The Bamasaba and Ateso [tribes from the East of Uganda] lay claim to the beverage, though many Bamasaba elders contend that Malwa was first brewed in Masaba land in the 1900’s.

The absence of written records in most parts of Masaba land and Teso make the elder’s statements hard to authenticate but Magombe Wakitonyi, an elder in Mutoto, Mbale notes that the ancient Bamasaba brewed malwa long before anyone else did it.

“Even if there are no written accounts; there will always be oral accounts. Maize, millet and sorghum were introduced to our forefathers in the latter part of the 1800’s by the colonialists. At length, these crops did not only become staple foods; but also ingredients for fermented beverages like Malwa. The other tribes learnt the art of brewing from us,” Wakitonyi says.

Ephraim Eteyanga, an elder in Katakwi however demures, noting that the Ateso were the first to brew Malwa, traditionally called Ajon in Teso.
“The ancient Ateso who were part of the Nilotics ethnic group were the first to brew Ajon around the 11th century. Some other ingenious tribes in Africa were by then already making beverages out of fruits, milk, flowers and other cereals. The Ateso showed their ingenuity by making Ajon, principally out of finger millet. In the years of old, it was produced mostly at the household level for community or clan consumption. Now Ajon plays an important role in the country’s rural and urban economy because it’s a source of livelihood for many who sell it,” Eteyanga explains.

How it is made
For the Ateso, clean finger millet is the main ingredient when producing malwa.
“The millet is speckled with water to make it smooth and solid and then it is put into gunny sacks. It is then soaked overnight. The millet grain germinates within a period of 3-4 days. Once germination has occurred, the grains are sun dried for 1-2 days. Once the millet grains are dry, they are milled by grinding stones or in milling machines to produce flour,” Eteyanga says. 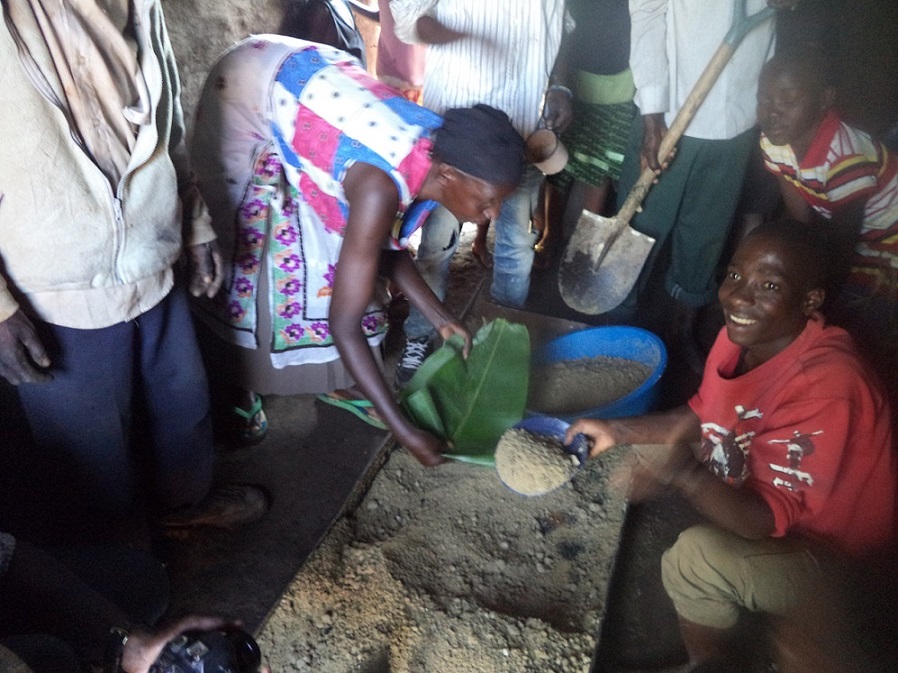 Once that is done, the millet flour is mixed with water to form a stiff dough.

As the fire burns, underneath the frying pans, the men in charge of the process continually stir the dough as it is roasted, so that it does not burn.
They have to make sure the fire is moderate to ensure that.

After the frying is done, the roasted dough is then sun-dried for 3- 4 days.
When it is dry, the brewing process starts.
“If the Malwa is for commercial purposes, the brewing is done in big drums and sometimes, big buckets. If it is for home consumption, the brewing may be in smaller buckets or drums. In each case, the roasted dough is poured into drums or buckets and mixed with lukewarm water to soften it, being that it was dried. After a few hours, the brewer stirs the mixture and adds ground green malt or yeast,” Eteyanga says.

Eteyanga adds that yeast is added for three days.

After the second day, the malwa turns sweet, more like Bushera.
On the third addition of yeast, the malwa fermentation process accelerates.
“After the third stage, the Malwa is ready to be served in big pots [Kumanje], buckets, small pots, small calabashes called Adere in the Teso region of Eastern Uganda,” Eteyanga says.

Malwa from Maize-popular among the Bamasaba-just about goes through the same process.
The fermentation of the ground maize flour-water mixture is done in almost the same way but for fewer days. After unearthing the thick maize dough from the ground, it is fried and dried.
Once it is dry, the brewers place the dried dough in a big drum or bucket.
“1.5-3 litres of water are added and when the dough softens, yeast is added.
As one adds yeast, they press the stiff hard dough particles to make sure they turn into liquid. Yeast is added for three days. The second day produces a sweet serving of the beverage and on the third day, the Maize Malwa is ready for serving,” Wakitonyi says.

The sweet serving is popular with women, little children and those who dread the ready malwa on religious grounds.

In Masaba land, malwa plays a huge role during even years, when young boys are traditionally circumcised.
Very few Imbalu [tradition circumcision] ceremonies take place without malwa. It is an Imbalu celebratory drink.

In the days following a candidate’s proclamation that he is ready for Imbalu; he is taken through a ritual called Khukoya Busera. Loosely translated, it means to brew malwa.
This is three days before he faces the cut. In this ritual, a candidate is made to fetch water from a stream in a pot, accompanied by his siblings and clan elders.
He brings the water and pours it in a pot containing the fried dough called tsimuma in Lumasaba.

“This rite is performed at the home of the candidate and of the clan head.
Malwa is then brewed and placed in a small special hut for maturation,” Wakitonyi says.

Under one pillar in the small hut, the Bamasaba believe lives the Bamasaba diety of reproduction called Mulabula.
Since Imbalu is regarded as a coming of age rite or a second reproduction of sorts in Masaba land, folklore dictates that the diety is appeased before the Imbalu candidate successfully undergoes the rite.
It is believed once the brewed malwa turns out good for drinking; the boy will not betray any signs of fear as he is cut.

In the years of old in Teso and to date, malwa drinking was used to settle disputes and drinking it was also viewed a means to creating cohesion in the communities.
In Teso, holding the drinking straw close to one’s mouth was regarded as an ominous act. For some people, it meant the person doing it was on a mission to poison them.

‘Drinkers would often shared stories as they partook on the beverage and this, at length, led to a sense of closeness.
A tale runs that drinkers would drink the beverage using one straw to show unity. During these gatherings, narratives were told to motivate and to give wisdom to Teso’s youngsters.

Malwa’s tourism potential
Malwa can be marketed as one of Uganda’s gastronomic tourism products. Gastronomic or culinary tourism refers to trips made to destinations where local food and beverages are the main motivating factors for travel.

“Malwa presents a unique and memorable drinking experience for those who have never tasted it, but if there is to be a level of acceptance for it; hygiene especially among the people who brew, sell and serve it, will have to improve. An annual malwa festival where people can showcase how it is prepared would come in handy. There are tourists looking for local beverage experiences and Malwa could form that gastronomic identity for Uganda,” Okwalinga says.