23 year old Sharon Karungi has all the makings of a great Basketball player. Her agile dynamism, competitiveness, prance like walk and stellar physical play have endeared her to basketball fans, not only in Uganda but also in the United States, where she currently plays.

Ugandan basketball fans stood a treat of Karungi’s talents when she made her debut, playing for the Gazelles, Uganda’s female national basketball team at the recently concluded Afro Basket Zone 5 national qualifiers, held in Kampala (September 21-28).
Karungi put on a clinic (basketball speak for performing well) notching up 23 points and 13 rebounds as the Gazelles obliterated the Egyptian women’s national basketball team, 78:45 in the team’s second meeting.
Karungi rose to the occasion, employing a repertoire of skills, her mid range jump shot skills, offensive and defensive skills were all on full display in the game.
It was a huge victory for the Gazelles because a second defeat at the hands of the Egyptian women would have meant elimination.
The Egyptian Women had defeated the Gazelles in their first game.
In that game, Karungi came up big too, scoring 23 points and 11 rebounds.

Karungi gave a good account of herself, as well, as the Gazelles defeated the defending women’s champions; Kenya in the winner takes it all, final ladies game, 64-61.
The victory over the Kenyan women meant the Gazelles had achieved an unprecedented feat in qualifying for the Afrobasket championships and the all Africa games for the first time.
Both tournaments will be held next year in Cameroon and Congo Brazzaville respectively.

On the evidence of her buoyant play, it was clear the 6 foot 2 inches tall Karungi was relishing the experience of playing for the Gazelles.

“It was definitely an honor to play for my country. I do not think I really have the words that can explain the feeling during that time of the tournament but there was definitely a lot of excitement. Playing with the team and getting to know the ladies and coaches on a personal level was a life changing experience. It is an experience one can only get when they are playing for the national team. Playing for the team was definitely eye opening,” Karungi says.

“The tournament built a lot of confidence in the players. I believe we have a start to do great for the country. I do believe we can go all the way in the African Championships, although I should say the journey will not be easy. There are going to really good and experienced teams up there, but with focus and discipline we can put a foot forward and get closer to the African Championship. It is all about hard work and making the necessary sacrifices,” Karungi says. 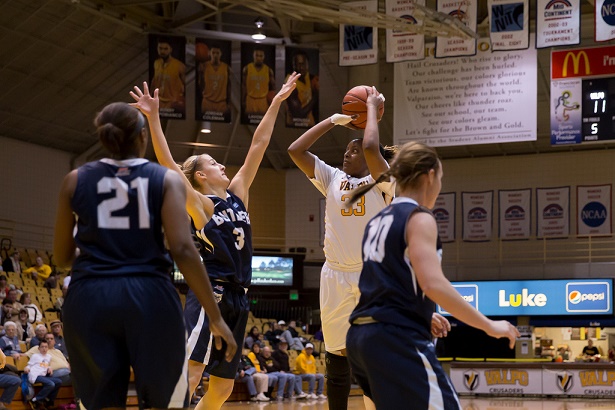 A START TO KARUNGI’S BASKETBALL CAREER

I started playing basketball in 2005 at Ndejje senior secondary school. I was around 14 years old then.
I played there for four years and then I joined Kibuli secondary school in 2009. I played for the Kibuli team for two years.
In 2011, I went to the United States to study on a Basketball scholarship.
I first enrolled at California Baptist University which at that time was an NAIA (National Association of Intercollegiate athletics) college.
In 2012, i moved to Oklahoma. I joined a college in Tonkawa called Northern Oklahoma College. I was in Oklahoma for two years.

After graduating from Oklahoma with an associate degree in Business Administration, Karungi moved to the state of Indiana in 2013.
She joined Valparaiso University, a division one NCAA (National collegiate Athletic Association) college.
Karungi is still at Valparaiso University.
She plays as a forward for the Crusaders, the Valparaiso university women’s basketball team, on top of pursuing a degree in Business marketing.
In her first season for the Crusaders, 2013-2014, Karungi appeared in all the team’s 31 games.
She was second on the team in scoring with 11.0 points per game.
She led the team in blocks (21) and in rebounding (7.4 rebounds) per game.

Karungi finished in double figures on 17 different occasions during her first season for the Crusaders
On Dec 7, she was named the Toledo invite Basketball tournament Most valuable player (Best Player).
At the tail end of the season, Karungi was leading the Crusaders in field goal percentage (52.9%) and total points (340).
To sum up her impressive debut season for the Crusaders, Karungi and a male colleague were jointly crowned Student athletes for the month of December, 2013.
During the Crusaders opening game of the season against the Butler university bull dogs last Friday (November 14th), Karungi scored 8 rebounds.

INSPIRATION TO PLAY BASKETBALL
Karungi says she drew the inspiration to play basketball from close acquaintances, Helene Kamukama, Agote Charity and Emily Nalika.
“These ladies pushed me like I had never been pushed before. They believed in me and gave me all the support I needed. I will forever be grateful to them for giving the chance to play and to be their teammate. My parents were also been invaluable mentors. Their belief in me and encouragement to play the game was a huge motivation. They have been behind me every step of the way,” Karungi says.

Karungi was born on the 16th September, 1990 to Mr Francis and Mrs. Christine Kaahwa.
The family hails from Buliisa District in the Bunyoro sub region in Western Uganda.
Karungi is one of 20 children.
“I grew up in a very large family with so many brothers and sisters. All of us have attended school and finished to the highest level. We are very close to each other as a family. I’m one of the youngest in the family,” Karungi says.

Whilst most basketball players are infamous for being conceited and cocky, Karungi seems the exception.
At the Afrobasket Zone 5 qualifiers, her easy going and congenial nature was all too evident as she interacted freely with fans.

According to online accounts, Karungi did not find it hard to blend in when she joined Valparaiso. The narrative is that she bonded almost immediately with other members on the Crusaders team, on account of her friendly and laid-back temperament.

“Karungi is just a regular girl. My attitude on the basketball court is totally different however. On the court, one has to take charge of the game and being a post up player (equivalent of a soccer striker); I tend to be a bully. The opposing team players have to know that nothing comes easy when they play against me and my teammates. Otherwise off the court, I’m a friendly and social person,” Karungi reveals.

A typical day for me as a basketball player starts about 7am in the morning with a gym workout. After the weight training and conditioning, I prepare for classes.
After classes, I invariably prepare for about 3 hours of basketball practice.
Right after practice, its study time. At about 10pm, I am ready to end my day.

Iam able to juggle the two by following a very strict work ethic; everything I do has to be on schedule. My day to day life is basically scheduled to detail, each day is planned for and I believe this has helped me balance the two. Academically, keeping in touch with my professors and communicating ahead of time about the days I will not be able to attend class has been helpful. I make sure I do my part and finish assignments and submit them on the due dates. My life outside basketball and academics is pretty calm. I watch a lot of movies, read business oriented books, listen to music, play video games and spend time with close friends,” Karungi says.

ON THE CHEQUERED CAREER, PLAYING BASKETBALL IN THE UNITED STATES.
Though striking a balance between academics and playing basketball has not been much of a hustle for Karungi, she admits she has had to grapple with some long odds.
“Iam always on the road as an athlete. Inevitably I get fatigued, yet I have to know what is going on in class. Communication and dealing with the team is also a huge challenge at times. Being an international player a lot of times we are misunderstood, people failing to understand where you come from coming but still demanding a lot. The level of competition here is really high and one can not simply say they have made it. You have to work extra hard. It is however not difficult to play here as long as one is willing to put in work. The difficult part comes when one has to deal with the differences in culture. For Ugandan basketball players who want to play here, keep working hard,” Karungi says.

Karungi says it’s her dream to eventually play professional women’s basketball in the United States.
“I have grown as a basketball player. My dream always was to play in the WNBA (Women's National Basketball Association). As a young player, I did not know what it takes to get to that level. Now that I know and with this chance availed to me, Iam going to put in lots of work, with a set aim of making it,” Karungi says.

The WNBA is the professional women’s basketball league in the United States. Founded in 1996, it is the Women’s equivalent to the more popular National Basketball Association (NBA), the men’s league.

IF SHE WAS NOT PLAYING BASKETBALL

Karungi asserts that if she was not playing basketball, she would be doing business.
“I have always loved getting acquainted with the ways and means of making money. I would probably be doing some graphic art designs as well,” Karungi says.