In many African societies, people living with albinism struggle to find social acceptance. In environments pervaded with albino phobia, stigma and negative stereotypes, it is a tall order.
There are people living with the condition however who are intent on shedding the negative stereotypes associated with albinos. One of those people is Gerald Byamukama; a 15 year old from Rubirizi district in western Uganda.
Many people ill advisedly regard albinism as a handicap, but I prefer to look at it differently, Byamukama says.

“Albinism is not a handicap in any kind of way. The only handicap I see is placing limits on myself because of people’s illusions about my condition. As long as my attitude is right, I know I can bring a value to my life. Albinism is not by choice and it should not be a basis for anyone to judge me or to hold me in a low regard. There are many great albino people out there making a difference in their societies and I intend to do the same,” a buoyant Byamukama says. “The difference in my skin appearance does not make me any less human as some people would want to make it seem. Albinos have rights just like normal skinned people and nobody should infringe on them. Nobody will make me hate myself. I will also not let people patronize me under the guise of trying to be friends,” he says. There have been moments however, when Byamukama has been inundated by some people’s indifference. “On several occasions, I have faced discrimination and disdain. People have called me ridiculing names. Some have even gone to the extent of calling my condition a punishment from the gods. It got to a point when I started hiding in the house, almost the whole day.  I can only wonder how life is for that beat down, often stigmatized and socially withdrawn albino child or adult who lives in an environment where traditional myths and superstitions about albinism abound. There is need to promote greater awareness of albinism throughout the country,” Byamukama says.

Byamukama says people have often asked him farfetched questions about albinism. “People ask me if albinos die a natural death or they just disappear in thin air. The Myths and superstitions about albinism are widespread almost everywhere, my village not excluded. People should know that sacrifying an albino or taking their body parts to a witch doctor does not bring good luck or riches,” Byamukama explains. Hailing from Nyangorogoro village, Ryeru subcounty, Byamukama is way ahead of his time. I will not let albinism define me as a person,” he says confidently. 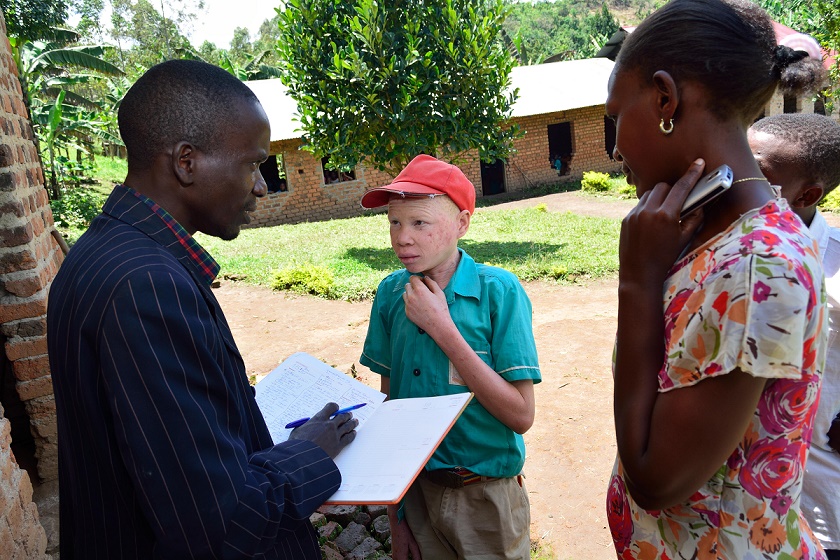 DEALING WITH DETRACTORS AND BULLIES
The way Byamukama trots his thoughts out is something of an enigma but his confidence has kept many detractors and bullies at his school and in his village at bay.
“I come across different people in the course of everyday. Many are condescending, showing their prejudices in an instant. Being young and living with this condition has been a hard thing but I have, with time, learnt to take things in my stride and to act assertive in situations that are intimidating. Hearing stories of how witchdoctors request for our body organs is a frightening prospect. On many occasions, I even fear moving out alone at night,” he says. 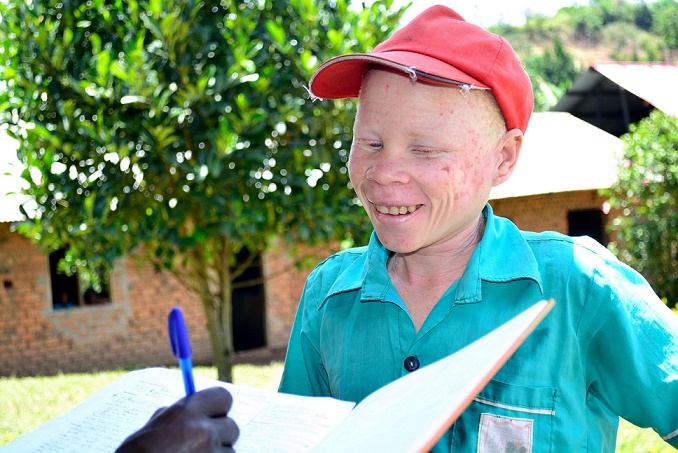 The sensitivity of Byamukama’s skin and reduced visual acuity have also been at issue, principally as regards enjoying his studies, but they have not deterred him.
Albinos are particularly oversensitive to sunlight. Amongst other things it gives them reduced sight and it burns their skin.
Byamukama currently studies at Nyangorogoro Primary school in Rubirizi district.
He is set to complete his primary schooling later on this year, (2014).
A seat was reserved just for him at the front of the class because of his sight issues.

“I love school. Education will be a mean to achieve an end in my life. With an education, I feel I can change a lot not only in my life but in the lives of other Albinos who are discriminated against in many parts of the country. My parents, Paulo Tumuhairwe and Felista Bikwasi played a huge role in encouraging me to embrace school," Byamukama says. 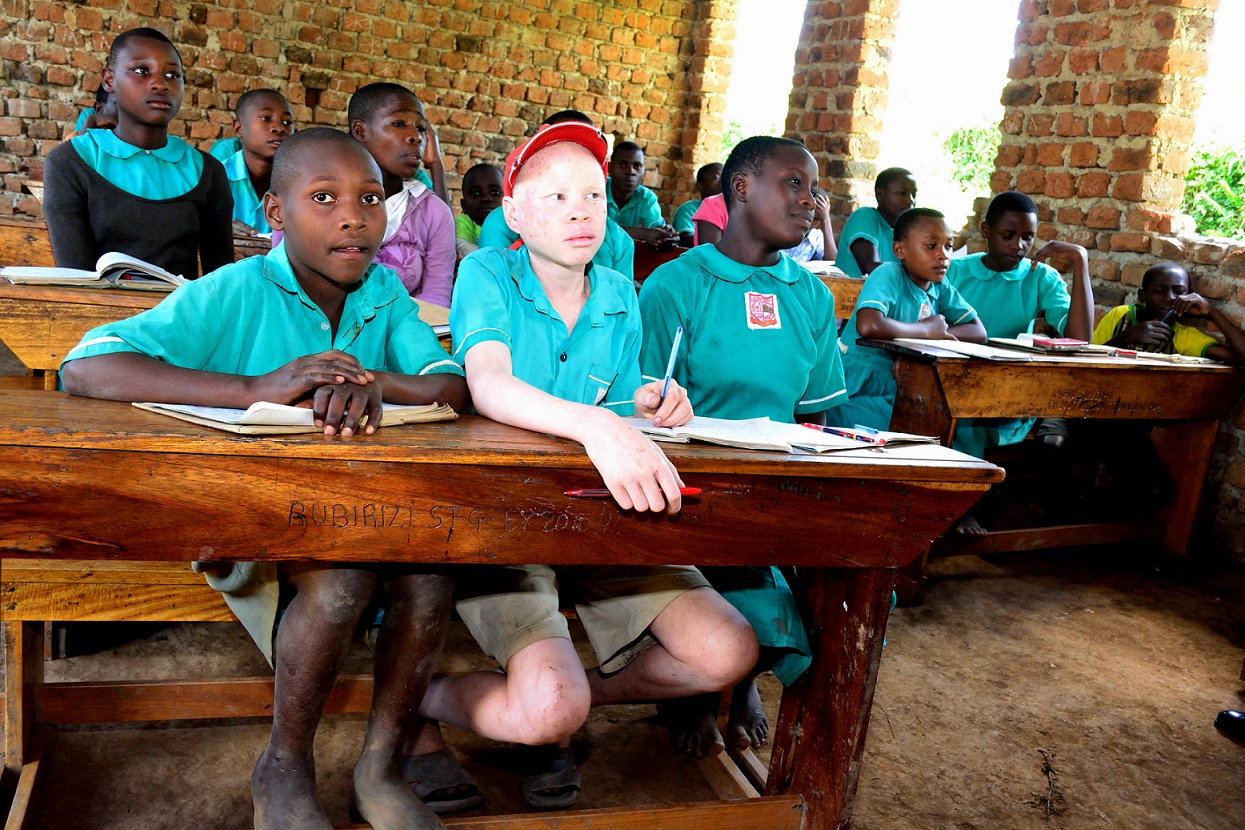 By all accounts, Byamukama has been giving a good account of himself academic wise.
His teachers say he has performed consistently well.
“In all the classes he has gone through, he has always kept amongst the best performers. His sight has however posed some problems for him often. Fees has also been an issue. If only he can get support at paying fees, he can get even the more settled. Support in terms of paying for the treatment of his eye sight issues will also come in handy. He needs sunscreen lotions for his skin, better glasses for his eyes and a hat to protect his skin,” Vincent Aruho, one of Byamukama’s teacher’s says.

Byamukama was intent on dropping out of school, at one point, however. “People could say to me that if i was ever going to go to school, it would only be a school for the blind. I was taunted and often told I would be a slow learner because of my poor eye sight and that I would not compete with normal sight students. I was also at a danger of becoming a product of an environment where education was not given priority. It took my parents moral support and support from the National Union for disabled persons of Uganda for me to stay in school. Their training motivated me to embrace and cherish education. I realised my right to education was just as important as my right to life. My dream is to become a medical doctor. I want to be able to help my community on issues to do with health. I also want to learn some important life skills,” Byamukama says.

The United Nations High Commissioner for Human Rights reports that there were more than 200 cases of ritual attacks against persons living with albinism in 15 countries between 2000 and 2013. Most of the attacks needless to say occurred in Africa.
The United Nations says owing to the secret nature of witchcraft-related rituals and the vulnerability and stigmatization of the target population, many more attacks remain undocumented and unreported.

Albinos are people borne with lack of melanin, the pigment that protects the skin from ultraviolet sun light.
The lack of pigment in their hair, skin and eyes makes them highly susceptible to sun-induced skin damage.
Because their skin is easily damaged by sun exposure, people with albinism are also at increased risk of skin cancer and sun burn.
In many African countries, albinism is considered to be a disability and often social attitudes are characterised by lack of understanding, fear and prejudice.
As a result, persons living with albinism in many parts of Africa face social stigma and discrimination on a frequent basis.
Statistically, Africa seems to have a high prevalence of people born with albinism. The United Nations says Sub-Saharan Africa particularly has a much higher prevalence rate for albinism. Anestimated one in 5,000 are affected by the genetic disorder. Worldwide it reportedly affects approximately one in twenty thousand people.
The harshest form of albinism is oculocutaneous albinism. Sufferers present with white or pink hair, skin, and iris color, as well as eyesight problems.
Read More